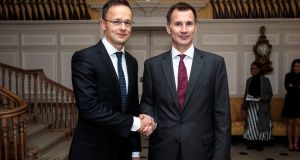 An attempt by Hungary to get the EU to cut funding to NGOs that are hostile to Israel – specifically those supporting boycott and divestment (BDS) campaigns – is expected to be given short shrift at Monday’s meeting of EU foreign ministers.

Hungarian minister for foreign affairs Peter Szijjártó will ask the meeting in Luxembourg to ensure that NGOs “that engage in incitement to violence and hatred or engage in boycotts, divestment and sanctions against Israel” and those “contributing to illegal migration” on the Mediterranean do not receive EU funding for civil society groups.

But while fellow member states oppose the international divestment and boycott campaigns,  they – Ireland, in the form of Tanáiste Simon Coveney,  included – are  concerned by what are seen as attempts to muzzle legitimate campaigns.

And although there are worries in several states that NGO rescue ships in the Mediterranean may, as they see it, be facilitating the work of people traffickers, attempts to curb their work would be politically hugely controversial.

The Hungarian move is not seen as likely to attract significant support.

A number of international supporters of divestment have in recent times been denied access to Israel following the introduction of an Israeli law, in May 2017, which forbids entry visas or residency rights to foreign nationals who call for economic, cultural or academic boycotts of Israel or illegal Israeli settlements in the occupied West Bank.

In January, Israel published a “blacklist” of 22 international NGOs “whose employees and/or members are banned from entering Israel due to their alleged support of the BDS campaign.

Israel is reported to have written to several EU member states – and recently the Swiss – asking them not to assist BDS-supporting groups. Only Germany currently refuses them funds, but Hungary is a strong supporter of Israel and has broken ranks with the rest of the union by defending the US recognition of Jerusalem as Israel’s capital.

Embracing Israel as a “strategic partner”, Mr Szijjártó stressed in a recent interview that “We have always pushed for a balanced friendly and fair approach by the international organisations to Israel. We have vetoed many times declarations and resolutions of the EU which would have been unfriendly or unfair or hostile towards Israel.”

Ministers are also expected to have a brief discussion on the alleged Saudi involvement in the “disappearance” of dissident journalist Jamal Kashoggi in Istanbul. EU concern has been expressed by high representative for foreign affairs Federica Mogherini but no discussion of sanctions is expected until further evidence of Saudi responsibility emerges.

The meeting will also debate how to step up EU mediation involvement in two states, Libya and Nicaragua.

Two rival governments comprising the weak UN-backed Government of National Accord (GNA) in Tripoli and an Islamist-oriented one in Tobruk – both with backing from several armed militias – have continued to vie for power.

The EU, which has been mainly preoccupied with stemming the flow of migrants to Europe from Libya, wants to explore means of engaging with the internal political process – critics suggest that the EU’s focus on migration from the country has not seen enough work done to stem the flow of migrants into Libya or their treatment once there.

Last month, the UN Security Council voted unanimously to renew the authorisation for the EU naval operation Sofia to fight human trafficking off the coast of Libya. Ireland is an active participant in Sofia.