Harvey Weinstein trial: Former roommate of accuser says she was told of assault 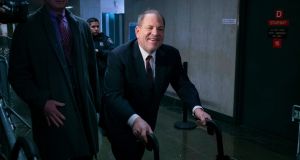 Harvey Weinstein arrives for his trial on Tuesday, in New York, US. Photograph: AP Photo/Craig Ruttle

The former roommate of Mimi Haleyi, one of the women who has accused Harvey Weinstein of sexual assault, took the stand on Tuesday in the former Hollywood mogul’s trial for sex crimes.

Elizabeth Entin told jurors in New York that Haleyi, visibly upset, told her in the summer of 2006 that Mr Weinstein forced oral sex on her.

Weinstein (67) has pleaded not guilty to sexually assaulting Ms Haleyi and Jessica Mann. Since 2017, more than 80 women, including many famous actors, have accused Mr Weinstein of sexual misconduct.

The accusations fuelled the #MeToo movement, in which women have accused powerful men in business, entertainment, media and politics of sexual misconduct. Mr Weinstein’s trial is widely seen as a key moment for the movement.

Mr Weinstein, who reshaped the independent film industry with critically acclaimed pictures such as The English Patient and Shakespeare in Love, has denied the allegations and said any sexual encounters were consensual.

Ms Haleyi, who worked as a production assistant on a Weinstein television show, told jurors on Monday that Mr Weinstein invited her to his Manhattan home in July 2006 and attacked her, backing her into a bedroom and forcing oral sex on her.

Ms Entin said on Tuesday that she and Ms Haleyi shared an apartment in 2006.

She said that one evening Ms Haleyi appeared unusually nervous, and told Ms Entin that Mr Weinstein had assaulted her in his home.

“She said ‘I’m on my period’ and he said ‘I don’t care’, at which point he threw her down, pulled down her underwear, pulled out her tampon and went down on her while she was saying ‘no’,” Ms Entin said.

Ms Entin testified that she told Ms Haleyi her experience sounded like rape and urged her to speak to a lawyer, but that Ms Haleyi did not want to.

At the time, Ms Entin said, she saw Mr Weinstein not as a threat but as “a pathetic older man trying to hit on Miriam”.

On cross-examination, Donna Rotunno, one of Mr Weinstein’s lawyers, asked Ms Entin whether she knew Mr Weinstein had paid for Ms Haleyi to travel to Los Angeles and London after the alleged assault, and that she had continued to communicate with him. Ms Entin said she did not.

After Ms Entin left the stand, prosecutors showed jurors several old photos of Mr Weinstein, including one of him and former US president Bill Clinton. They previously had said they wanted to introduce the photo to demonstrate Mr Weinstein’s power and connections.

Ms Haleyi was the second accuser to testify against Mr Weinstein at the trial. Actor Annabella Sciorra testified last week that Mr Weinstein forced his way into her Manhattan apartment one winter night in 1993 or 1994 and violently raped her.

While Sciorra’s allegation is too old to support a separate rape charge against Mr Weinstein, prosecutors hope it will show he is a repeat sexual predator – a charge that could put him in prison for life.

Jessica Mann, a former aspiring actor, is expected to testify that Mr Weinstein raped her in 2013. – Reuters