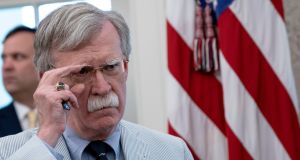 Two high-profile Republicans have signalled that claims in an upcoming book by John Bolton were sufficient reason to call the former US national security adviser to testify in Donald Trump’s impeachment trial, throwing White House hopes of a swift proceeding and exoneration into doubt.

Senator Mitt Romney, a former presidential candidate, said Mr Bolton’s assertion that Mr Trump told him he wanted to withhold aid to Ukraine in an effort to pressure Kiev to launch a damaging probe into Democratic political rivals made it “increasingly likely” other Republicans would agree to call him as a witness.

“At this stage it’s pretty fair to say that John Bolton has a relevant testimony,” Mr Romney said.

Senator Susan Collins, another Republican moderate who has also said she would consider voting to allow witnesses, said reports about the book “strengthen the case for witnesses and have prompted a number of conversations among my colleagues”.

Mr Trump has denied telling Mr Bolton he wanted to withhold Ukrainian military aid until Kiev complied with his demand to investigate former vice-president Joe Biden. The denial came in response to a New York Times report that Mr Bolton had detailed his conversation with Mr Trump in an upcoming book about his White House tenure.

Approached by the Financial Times in Washington on Monday, Mr Bolton smiled and said he was “too busy” when asked to comment. His book – titled The Room Where it Happened: A White House Memoir – is due for publication on March 17th.

Senate Democrats will push later this week for another vote to authorise calling witnesses. If they fail to get a majority – which requires them winning over at least four of the 53 Republican senators – the trial could end before the weekend.

Chuck Schumer, the top Senate Democrat, said it was “up to four Senate Republicans” to ensure that Mr Bolton testified. “If there was ever even a shred of logic left to not hear witnesses and review the documents, Mr Bolton’s book just erased it,” he said.

Mr Romney is among a handful of Republican senators seen as most likely to vote in favour of allowing new witnesses, which would prolong the trial and thwart Mr Trump’s hopes of a speedy acquittal in the Republican-controlled chamber.

Lisa Murkowski, an Alaska Republican who is also seen as a possible backer of calling witnesses, refused to show her hand, saying: “I stated before that I was curious as to what John Bolton might have to say . . . I’ve also said there is an appropriate time for us to evaluate whether we need additional information – that time is almost here.”

Mr Bolton, a foreign policy hawk who has over decades advanced the views of hardline Republicans, has put Senate Republicans in a tough position. Given his first-hand knowledge, damning testimony about Mr Trump would make it hard for Republicans to defend the president and could complicate some of their re-election campaigns.

If Mr Bolton is called to testify in the trial, it will force many Republicans to choose between a long-time party stalwart and a president that some view as an interloper.

While Senate Republicans scrambled to respond to Mr Bolton’s claims, Mr Trump denied the conversation ever took place, claiming his former national security adviser was seeking publicity for his book.

“I NEVER told John Bolton that the aid to Ukraine was tied to investigations into Democrats, including the Bidens,” Mr Trump wrote in a series of tweets.

The assertion by Mr Bolton – who claims he was not fired but resigned – undercuts an argument Mr Trump’s defence team is making in the impeachment trial: that there was no coercion campaign linking the aid with the investigations.

In his morning tweetstorm, Mr Trump repeated his argument that there was nothing inappropriate in his dealings with Ukraine. He also slammed the Democratic-controlled House of Representatives for not asking Mr Bolton to testify in the impeachment inquiry before it voted to pass to articles of impeachment in December.

House Democrats did ask Mr Bolton to testify, but did not serve him with a subpoena. Mr Bolton initially said he would resist any subpoena in court. But he reversed course in January, saying he was prepared to testify in the Senate trial if he was subpoenaed.

The White House says the withholding of $391 million in military aid was unrelated to a demand that Ukrainian president Volodymyr Zelenskiy announce a probe into Mr Biden and his son, Hunter, who had served on the board of a Ukrainian gas company.

Democrats want to call Mr Bolton because of his first-hand knowledge. He was said to have been critical of the effort led by Rudy Giuliani, Mr Trump’s personal lawyer, to pressure Ukraine to find dirt on Mr Biden, one of the leading Democratic contenders vying to face Mr Trump in November’s presidential election.

John Ullyot, spokesperson for the National Security Council, said Mr Bolton’s book had been sent to the NSC for pre-publication review and had not been shared with others. “No White House personnel outside NSC have reviewed the manuscript,” he said.