US has urged allies to exclude Chinese company from networks, citing security risk 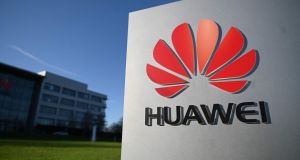 Boris Johnson has faced criticism from senior Conservatives at Westminster and Republicans in Washington for his decision to allow Huawei to take part in Britain’s rollout of 5G networks. The Chinese company’s involvement will be limited to 35 per cent of the network’s periphery and it will be banned from supplying equipment to sensitive parts of the network.

Foreign secretary Dominic Raab said Britain wanted “world-class connectivity” as soon as possible, but not at the expense of national security.

“We will legislate at the earliest opportunity to limit and control the presence of high-risk vendors in the UK network, and to allow us to respond as technology changes. Over time, our intention is for the market share of high-risk vendors to reduce as market diversification takes place, and I want to be clear that nothing in the review affects this country’s ability to share highly sensitive intelligence data over highly secure networks, both within the UK and with our partners, including the Five Eyes,” he told the House of Commons.

The Five Eyes alliance has allowed intelligence sharing between the United States, Britain, Canada, Australia and New Zealand since the 1940s. The US has urged its Five Eyes partners to exclude Huawei from their 5G networks because the company’s closeness to the Chinese government creates a security risk. Australia and New Zealand have banned Huawei equipment from their networks but Canada has yet to make a decision on the issue.

Former Brexit secretary David Davis was one of a number of senior Conservatives to call on the government to ban Huawei from any role in the 5G network.

“It was founded by a member of the People’s Liberation Army. Even if it were not an arm of the Chinese Government, the 2017 law requires that it take instruction from the Chinese intelligence agency. In the future, the size and complexity of the problem we are trying to protect against will be enormous. Huawei alone-forget the rest of China-has tens of thousands of researchers working on this, and I am afraid that the only way to protect our safety is to ban it,” he said.

Britain did not give Washington any advance warning of the announcement but Mr Johnson spoke to US president Donald Trump during the afternoon on Tuesday. The Trump administration expressed disappointment at the decision and Republicans in Congress warned Mr Johnson about the seriousness of his decision.

“By allowing Huawei into [the] UK 5G network, Boris Johnson has chosen the surveillance state over the special relationship.Tragic to see our closest ally, a nation Ronald Reagan once called ‘incandescent with courage,’ turn away from our alliance and the cause of freedom,” Liz Cheney, a member of the House of Representatives, said on Twitter.

Three of Britain’s four mobile networks have already decided to use Huawei’s 5G products, which are cheaper than those of their competitors. The government said Britain needed to “improve the diversity in the supply of equipment” to the country’s telecom networks, which mostly depend on three suppliers: Huawei, Nokia and Ericsson.