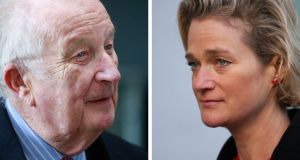 King Albert II, who abdicated from the Belgian throne in mysterious circumstances in 2013, has acknowledged having fathered a child during an extramarital affair in the 1960s, following the result of a court-ordered DNA test.

Delphine Boël has been fighting in the courts for six years to prove that Albert, 85, is her biological father. She could now be entitled to one-eighth of Albert’s estate.

After a long-running legal battle during which Albert vehemently rejected Ms Boël’s claims, , the king’s lawyer, Alain Berenboom, issued a grudging admission in a statement on Monday evening.

Mr Berenboom said: “His Majesty King Albert II has taken note of the results of the DNA test in which he cooperated at the request of the Brussels court of appeal. The scientific conclusions show that he is the biological father of Mrs Delphine Boël.”

He continued: “Even though there are arguments and legal objections to justify that legal paternity does not necessarily mean biological paternity, and that the procedure used seems to him disputable, King Albert has decided not to use those arguments and to end with honour and dignity this painful procedure.

Responding to the surprise news, Ms Boël’s lawyer, Alain De Jonge, told reporters: “We will refrain from commenting for the time being.”

Ms Boël, 50, sought acknowledgement 20 years ago from Albert but her appeals were rejected despite there being evidence that the king was involved in her early childhood. As a child she is said to have nicknamed him Papillon, or Butterfly.

According to the Het Nieuwsblad newspaper, relying on the accounts from Ms Boël’s friends, she resorted to legal relief in June 2013 after the eldest of her two children, Joséphine, ended up in the hospital with pneumonia, and she felt the absence of her father.

Ms Boël’s claim received a vital boost last autumn when the court of appeal ruled that Jacques Boël, with whom she grew up, was not her biological father. The court instructed an expert from Erasmus hospital to carry out a test to compare her DNA with Albert’s.

The king agreed to provide a saliva sample after the courts threatened to fine him €5,000 (£4,370) for every day that he refused.

On the day Albert stepped down from the throne seven years ago citing ill health, Boël’s mother, Baroness Sybille de Selys Longchamps, spoke publicly for the first time about her alleged affair with the king in a TV interview.

“I thought I could not have children because I had had an infection,” she said of the relationship, which it is claimed spanned from 1966 to 1984. “We had not taken any precautions.”

She continued: “It was a beautiful period. Delphine was a love child. Albert was not the father figure but he was very sweet to her.”

Albert later admitted he and his wife had gone through a marital crisis but the king denied an affair. – Guardian

Conservatives on brink of landslide victory in Iranian elections 16:11
Coronavirus in Europe: Two dead in Italy as fears grow that attempts to contain illness are failing 09:03
Italy has first coronavirus death 23:44
US officials tell Bernie Sanders Russia is trying to help his campaign 22:00
Weinstein jurors deadlocked on most serious charge, court hears 21:50