Akon’s city, run on renewable energy and using cryptocurrency, to be named after him 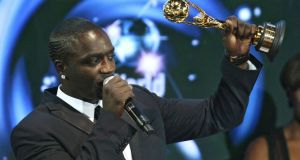 American-born musician Akon has finalised plans to set up his own city in Senegal, which he says will be named “Akon City” and run on a cryptocurrency called the “Akoin”. He says it will be a “futuristic environment”.

On January 13th, the 46-year-old tweeted a picture of himself posing with Senegalese officials, writing: “Just finalised the agreement for Akon City in Senegal. Looking forward to hosting you there in the future.”

The musician – whose real name is Aliaune Damala Thiam – spent six years in Senegal as a child before moving to the US. He announced his plans to build a city there in 2018, saying Senegalese president Macky Sall had gifted him 2,000 acres of land to build it on.

Akon has previously said Akon City will be built up over a decade and that it will be powered by renewable energy.

Akon’s management was not available to speak further about his plans for Akon City.

Akon is perhaps best known for his 2006 hit song Smack That, and the 2005 song Lonely, which features a high-pitched voice along with Akon, singing about losing a girlfriend. In recent years the musician has expanded his philanthropic efforts, setting up the Akoin Foundation, which says it exists “to empower young entrepreneurs first in Africa”.

“We have set ourselves a goal to educate, inspire and activate two million new CEOs in Africa and beyond by 2030,” it says on theits website.

The musician also set up the Akon Lighting Africa Initiative, focused on helping more Africans have access to different forms of off-grid energy.

Senegal is a west African country with a population of more than 15 million. About half of its citizens live in urban areas.

“While I like rapper Akon, the idea of wealthy folks owning and personally branding entire cities doesn’t excite me. Privatisation and individual interests are largely responsible for urban inequity and the climate crisis,” said Jay Pitter, a Canadian who works on the design, programming and policy of public spaces across North America, in response to Akon’s latest announcement.

“I’d like us to reimagine what taking up space can look like. Cities should be stewarded and co-owned by all of us,” she said.

A cryptocurrency is a virtual or digital currency that is not managed by a central bank. The world’s most well-known cryptocurrency is bitcoin, which was created in 2009. Speaking to Vice magazine in 2018 about his plans for a cryptocurrency, Akon said “This coin is focused specifically on Africa. Businesses that could be utilised in Africa, the population that can be using it in Africa, and, more importantly than anything, the entrepreneurs that can be developed and honed in Africa.”