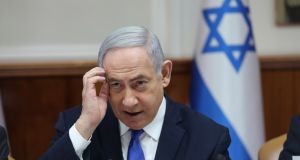 Israeli prime minister Binyamin Netanyahu was formally indicted in court on Tuesday on corruption charges after he withdrew his request for parliamentary immunity from prosecution. Photograph: Abir Sultan/EPA

Israel’s prime minister Binyamin Netanyahu was formally indicted on charges of corruption after dropping a request for parliamentary immunity that had threatened to delay his trial for months.

The move means the four-time premier’s trial could begin before he stands for re-election on March 2nd, facing off against an alliance led by retired military chief Benny Gantz for the third time in a year after two deadlocked votes.

While Mr Netanyahu’s pursuit of parliamentary immunity was largely seen as a delaying tactic, he used the announcement that he had dropped the request to criticise his opponents ahead of the release of a US-sponsored Middle East peace plan that is widely expected to give him a political boost.

“Instead of grasping the gravity of the hour, and rising above political considerations, they continue to engage in cheap politicking, harming a decisive moment in the history of the country,” Mr Netanyahu said in a Facebook post from Washington DC, where he plans to accompany his ally, US president Donald Trump, in unveiling the deal. The plan is expected to largely appease right-wing Israeli demands regarding control over settlements in the occupied West Bank.

Avichai Mandelblit, Israel’s attorney general, responded by immediately filing an indictment in a Jerusalem court, the Ha’aretz newspaper reported, kicking off a criminal prosecution that could end Mr Netanyahu’s storied political career and even land him in prison. Mr Netanyahu has denied all the charges, calling the investigation a politically orchestrated witch-hunt designed to topple his right-wing government.

Mr Mandelblit announced his intention to indict the prime minister in November. The charges of bribery, fraud and breach of trust, concern gifts Mr Netanyahu allegedly received from wealthy friends and an alleged arrangement with a newspaper publisher for positive coverage.

The prosecution of Mr Netanyahu has dragged due to an electoral deadlock and the still unanswered legal question of whether Mr Netanyahu would be allowed to form a new government, while facing trial. There is no legal or constitutional precedent in Israel for the situation.

“Netanyahu will go to trial now, and we must move forward,” Mr Gantz, the prime minister’s rival, said. “Israelis have a clear choice . . . No one can run a state and at the same time manage three serious criminal cases for bribery, fraud and breach of trust.”

Mr Netanyahu delayed his announcement until Mr Gantz had left Washington on Monday to return to Israel to oversee the parliamentary immunity process. Mr Gantz had travelled to Washington on Sunday at Mr Trump’s request in a trip seen as a US attempt to blunt suggestions the peace plan was being released before the next Israeli elections to aid Mr Netanyahu.

Mr Netanyahu is expected to use the US-led plan to portray himself as the only Israeli leader able to deliver on a peace deal likely to be slanted to right-wing Israeli aspirations including the formal annexation of Jewish settlements in the occupied West Bank. – Copyright The Financial Times Limited 2020