High-speed rail and cross-border ferry services to be stopped, with flights reduced 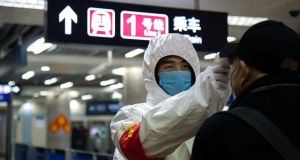 A health worker checks the temperature of a man entering the subway in Beijing, China. Photograph: Betsy Joles/Getty Images

Hong Kong said on Tuesday it would stop issuing permits to mainland Chinese tourists and drastically reduce cross-border travel as the number of Wuhan coronavirus infections continues to soar.

High-speed rail and cross-border ferry services to Hong Kong will be stopped, flights from the mainland will be cut in half, some border points will be closed and officials will suspend individual travel visas for mainlanders, chief executive Carrie Lam said.

The efforts to stem the spread of the deadly virus in Hong Kong, a city that was severely affected by the Sars epidemic in 2002-03, stopped short of the total shutdown that was demanded by several politicians and medical workers.

Hong Kong has reported only eight cases of the virus to date, but the number of confirmed cases on the mainland is rising rapidly and the pathogen has spread to 17 countries and territories in recent days.

Japan and Germany reported the first confirmed cases of human-to-human transmission outside of China on Tuesday. The UK foreign office later issued a statement advising against “all but essential” travel to mainland China due to the outbreak.

The European Commission also said it would help fund two aircraft to fly EU citizens home from Wuhan, the city believed to be at the centre of the outbreak, with 250 French nationals leaving on the first flight.

China announced 24 deaths on Tuesday, bringing the total number of fatalities to 106. The number of confirmed infections surged to 4,630, from less than 3,000 the previous day, the National Health Commission announced.

An additional 7,000 cases are suspected and are awaiting confirmation, it said.

The infection is believed to have originated in wild animals in a market in the central Chinese city of Wuhan, where it jumped to humans before spreading rapidly.

Authorities initially sealed off Wuhan and other cities in Hubei province, isolating some 50 million people in an effort to contain the outbreak. With the number of fatalities and infections spiking, they then imposed a range of restrictions nationwide and on Tuesday urged its citizens to postpone overseas travel indefinitely.

There are at least eight Irish nationals in the Hubei area under effective lockdown for the past six days. The Department of Foreign Affairs has contacted them and is exploring options to arrange an evacuation, if required.

At present, the members of the Irish community are opting to remain in China, including Liam Griffey from Ennis in Clare. “I’m staying put. I’m staying here because my girlfriend and the dogs are here. I don’t see why people would leave, especially if they have Chinese loved ones,” he said.

He said he ventured out only to walk his dogs or make occasional trips to the supermarket, and apart from that his days are spent in his apartment with his girlfriend following the news, cooking, reading and watching movies.

“I’m feeling pretty good about staying,” he said. “I’m enjoying the quietness – no ebikes and no ebike alarms, it’s great – but the days are starting to become a little humdrum.”

Several countries, including the United States, France and Japan, are making arrangements to repatriate some of their citizens.

World Health Organisation (WHO) chief Tedros Adhanom Ghebreyesus, who is in Beijing to meet Chinese leaders, said he does not recommend the evacuation of foreign nationals from the affected areas, according to a report on Tuesday from the Xinhua news agency.

The WHO had confidence in China’s epidemic prevention and control ability, the report said, and “called on the international community to remain calm and not overreact”.

As Wuhan health officials battle on the frontlines, they have reported a chronic shortage of diagnostic kits, protective gear and hospital beds to deal with the viral outbreak.

The city is building two prefabricated facilities and designating new areas in various hospitals to the coronavirus control efforts in the hope of making 10,000 additional beds available within a week “to boost the city’s overwhelmed health system”, an official said.

On an inspection trip to the city, premier Li Keqiang said extra supplies and medical staff were being sent to the city, and he urged local officials to quickly make the extra beds available.

“We must use every possible means to admit all the patients into a hospital,” he said. “We must fight resolutely to win the battle against the epidemic.” Additional reporting: Reuters