New left-wing coalition under pressure amid controversy over parental authorisation 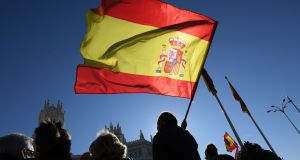 Supporters of Vox rally in Madrid. The far-right party has taken a tough line against feminism and LGBT initiatives. Photograph: Oscar del Pozo/AFP via Getty

The far-right Vox party is demanding that parents be allowed to prevent their children from participating in complementary school activities, due to moral qualms, even when the exercise is graded, within school hours and has been deemed obligatory.

Vox’s main concern is sex education, particularly when linked to the LGBT community.

Mr Abascal appeared to be referring to an educational scheme in the Navarre region, which encourages small children to explore their “sexual curiosity”.

A new left-wing government took office earlier this month. Led by the Socialist Pedro Sánchez, in partnership with the far-left Podemos party, it is the first coalition Spain has had in the modern era. Vox, which is now Spain’s third party in parliament, has vowed to oppose what it calls “the lefty consensus” and has taken a tough line against feminism and LGBT initiatives.

The far-right party has made its support for a budget bill in the southern region of Murcia contingent on allowing parents to boycott classes they deem inappropriate for their children. The Popular Party (PP) and Ciudadanos, which govern in a right-wing coalition there, need the support of Vox in the local parliament and have agreed to the measure.

The PP’s leader, Pablo Casado, has embraced the policy recently, even though it has not been in his party’s manifesto.

However, although Spain’s 17 regional governments have some control over education matters, this parental authorisation policy is not allowed under national law. Spain’s government has given the administration in Murcia one month in which to cancel the measure before it takes legal steps.

“They intend to break school co-existence and the culture of dialogue in order to impose a blind and uncritical authoritarianism,” read a manifesto against the measure signed by the eight education ministers in the regions where the Socialists govern.

The controversy is a new battleground in Spanish politics, where Catalan and Basque nationalism had been the main drivers of polarisation. Mr Casado has accused the Sánchez government of behaving like communist Cuba after a spokeswoman for the prime minister said that children “do not belong to their parents”.

“Are we going to get to the point where children also inform on their parents if they are not good revolutionaries?” said Mr Casado.

Vox is campaigning to introduce the policy in the Madrid region as well, where the PP and Ciudadanos also need its support to govern. However, the local wings of both parties there have voiced concerns, reflecting a broader unease within both the PP and Ciudadanos at the influence that the far right is having on them.