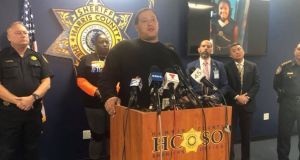 Authorities in the US are searching for a driver who fired several shots into a car carrying a family in the Houston area of Texas, killing a seven-year-old girl and wounding the child’s mother.

Investigators have released a surveillance-video image of a red, four-door pickup truck from which the driver fired the gunshots.

Harris County sheriff Ed Gonzalez declined to speculate on what prompted the driver to fire into the car carrying seven-year-old Jazmine Barnes, three of her sisters and her mother.

Jazmine’s mother suffered a gunshot wound to the arm and Jazmine’s six-year-old sister was injured by shattered glass in the incident.

Jazmine’s father Christopher Cevilla appeared with Mr Gonzalez at a news briefing and pleaded with the public to help find the gunman. – AP