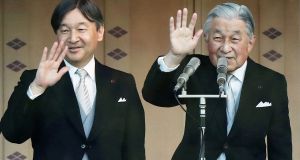 Japan’s Emperor Akihito and Crown Prince Naruhito wave to the crowd during the new year’s greeting ceremony at the Imperial Palace in Tokyo on Wednesday. Photograph: Jiji Press/AFP/Getty Images

Japan’s Emperor Akihito has waved to throngs of well-wishers eager to see his final new year’s appearance before abdicating in several months.

“I am truly happy to celebrate the new year with all of you under such cloudless skies,” the 85-year-old emperor told the crowd from a balcony at the Imperial Palace in Tokyo.

Emperor Akihito has made annual new year’s appearances with his wife, Empress Michiko, and other family members to wish peace for the nation. Japanese media reported that more than 150,000 people attended, a record under the emperor’s reign.

Many waited from early in the morning and waved Japanese flags when Emperor Akihito appeared. He succeeded his father, wartime emperor Hirohito, in 1989 and will abdicate on April 30th, with his elder son Naruhito ascending to the Chrysanthemum Throne.

Japan’s imperial family is far more cloistered than its Western counterparts, and Hirohito was once viewed as a god.

Emperor Akihito strove to become a more accessible emperor and was the first in modern history to marry a commoner, courting Empress Michiko on the tennis courts.

Both of his sons have married commoners. His abdication is also a rarity – he announced his desire to step down in a video message, citing a worry about how well he could perform his duties as his health declined.

The emperor appeared to wobble during a palace event earlier this week to greet foreign dignitaries. His wife reached out and held up his arm with hers.

His three-decade reign is known in Japan as “Heisei”, with the first character meaning “peace”.

A senior politician in the ruling coalition said a name for the new era will be announced on April 1st.

Crown Prince Naruhito appeared on the balcony with his wife, Masako, who was smiling and wearing a burgundy dress. She has missed some events over the years due to what palace officials have described as a stress-related illness, which is widely attributed to the pressures of palace life.

The Harvard-educated former diplomat expressed a desire to fulfil more of her duties in a statement released through the palace last month. She noted she had accompanied the crown prince in May to a Red Cross event she had missed for the last 15 years.

“The warm feelings of the people have helped me greatly,” she said of her recovery, hinting she may try to be more visible, as many had hoped when she gave up her career to enter the palace.

The public is closely watching to see how the younger and more international couple might bring more openness to a role that holds no political power but is widely recognised as a cultural and emotional symbol for Japan.

Crown Prince Naruhito (58), attended Oxford, speaks good English, plays the cello and has vowed to “protect Masako”. His younger brother and his family are also expected to play a fairly major role.

The Japanese throne is only inherited by male heirs, and the crown prince’s only child is a daughter. Prince Akishino and his young son are next in the line of succession after Crown Prince Naruhito. – AP