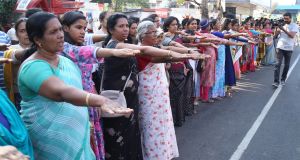 More than four million women formed a 620km “human chain” in the southern Indian state of Kerala on New Year’s Day in support of gender equality and to protest against a long-standing row over female access to an ancient Hindu temple.

The “women’s wall”, which stretched the entire length of the state, was organised in demonstration against Hindu activists enforcing an age-old ban on menstruating women – specifically aged 12-50 – from entering Sabarimala temple despite its revocation by India’s supreme court last September.

Women of all ages and occupations – including lawyers, doctors, actors, authors, teachers, civil servants and female labourers – stood shoulder-to-shoulder for 15 minutes in a display of solidarity during the late afternoon.

“Women must be allowed to pray in all temples,” said 56-year old Soudamini, a farm labourer from the southwest coastal town of Ernakulam who uses only one name.

Nobody could deny them their rights any more, she said, adding that the women’s wall was a warning to all regressive forces in Kerala.

Kerala’s gender protest ended with a pledge to “harness the power of enlightenment to insulate society against revanchist forces that sought to push the state back to the dark ages of casteism and discriminatory religious practices”.

“This wall is a warning to the conservative-communal forces, who try to deny women their legitimate rights and renaissance values,” state chief minister Pinarayi Vijayan, of the Communist Party of India (Marxist), posted on Facebook.

Hardline Hindu activists have been forcibly preventing female devotees from entering Sabarimala for more than three months ever since the supreme court over-ruled the centuries-old ban. The court had declared the ban was unconstitutional, infringed human rights and opposed equality of worship.

They also maintained that preventing menstruating women from entering the temple was necessary to appease its principal deity, Ayyappan, depicted as a celibate, yoga-practising god.

Two women secretly entered the Sabarimala temple before daybreak on Wednesday under police protection and left undetected after offering prayers inside the shrine, Mr Vijayan, the chief minister, confirmed.

State officials said the two women, Bindu Ammini (42) and Kanaka Durga (44), who had been prevented by activists from entering the temple last month, began their 17km long trek uphill to the shrine at about midnight on Tuesday.

Four hours later they entered the temple via a staff gate, instead of ascending the last 18 holy steps to the shrine. They left soon after, offering prayers to Ayyappa.

Once news of the two women having entered Sabarimala became public, the temple authorities closed down the complex for a few hours in order to “purify” it before opening it up once again.

Kerala’s BJP head, Sreedharan Pillai, criticised the temple entry by the two women, terming it a conspiracy by the state’s “atheist” rulers to destroy Hindu temples. “The BJP will support all struggles against the destruction of the Hindu faith,” Mr Pillai told local television news channels.