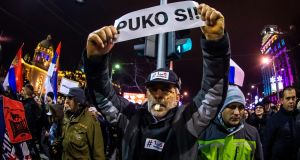 Serbian president Aleksandar Vucic has said he is ready to listen to protesters’ demands and to call snap elections if necessary, after thousands of people marched again on Saturday through Belgrade to denounce what they see as his increasingly autocratic rule.

Organisers said tens of thousands of people attended the fourth such rally in recent weeks, to demand the dismissal of senior officials and fair coverage of the opposition by pro-Vucic state media, and an end to corruption and political violence.

Whistling and chanting “Vucic is a thief”, some of the crowd also carried banners reading “No more bloody shirts!” in reference to the incident that sparked the protests – last month’s beating by unknown assailants of opposition politician Borko Stefanovic.

“We won’t be stopped or silenced,” said Mr Stefanovic, the leader of the Serbian Left party, said at Saturday’s rally.

The protests bear some resemblance to recent marches in neighbouring Hungary, by uniting a wide range of anti-government critics who accuse the authorities of eroding democracy and the rule of law as they consolidate power.

Just as Hungarian premier Viktor Orban and his Fidesz party dominate their country’s politics, so Mr Vucic and his Progressives maintain a stranglehold on public life in Serbia, thanks in part to their tight grip on media and big business.

“The struggle must be waged with loud chanting against this disgusting, slimy regime,” actor and protest leader Branislav Trifunovic told the crowd, while thanking Mr Vucic for inspiring so many Serbians to protest.

“If it wasn’t for him and his satraps, there would not be so many of us, we would not know what we are fighting against, we would not rise up and be together in such numbers,” he said.

Protest organisers played songs redolent of the rallies that led to the ousting in 2000 of nationalist leader Slobodan Milosevic, for whom Mr Vucic worked as information minister before rebranding himself as a pro-EU conservative.

After one recent rally, Mr Vucic said he would not bow to demonstrators’ demands “even if there were five million in the street” – prompting protesters to put the slogan “one of five million” on their banners and jackets.

“I am ready to listen to the people,” Mr Vucic said on Saturday night.

“They can tell me what is wrong and we can change or fix that. But if they think that this is not possible, and if they are the majority, I am ready for elections at any moment. I accept it – you will have elections”.

Opposition politician and former foreign minister Vuk Jeremic says such offers are absurd, however: “There will be no legitimate elections in Serbia with the participation of the opposition until after normal conditions for elections and living are created.”

Protesters in Belgrade also showed support for demonstrators in the Serb-run region of Bosnia, Republika Srpska, who are demanding justice for Davor Dragicevic (21) who was murdered in March. His father suspects a police cover-up and his campaign for an independent investigation has become a lightning rod for public discontent.