Diseases expert apologises for comments about UK’s approval of Pfizer vaccine, saying he did not mean to imply it had rushed the process 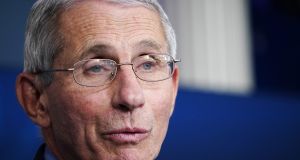 Anthony Fauci: “We have not yet seen the post-Thanksgiving peak. That’s the concerning thing, because the numbers in and of themselves are alarming…” Photograph: Getty Images

The US is continuing to see record levels of coronavirus infections, with more than 217,000 new cases reported on Thursday, prompting fear of a post-Thanksgiving surge.

Almost 2,900 deaths were also recorded on Thursday, and the number of people hospitalised for Covid remained above 100,000 as the healthcare system began to show the strain of handling the rise in infection rates.

Infectious disease expert Anthony Fauci warned that the impact of last week’s Thanksgiving holiday, which saw millions of people travel to spend time with friends and family, was not yet reflected in the Covid numbers.

“We have not yet seen the post-Thanksgiving peak,” he told NBC on Friday. “That’s the concerning thing, because the numbers in and of themselves are alarming…Likely, we’ll see more of a surge as you get two and three weeks past the Thanksgiving holiday.

“And the thing that concerns me is that abuts right on the Christmas holiday as people start to travel and shop and congregate.”

Earlier Mr Fauci apologised for his comments about Britain’s approval of the Pfizer vaccine, telling the BBC that he did not mean to imply that Britain had rushed the process.

“There really has been a misunderstanding, and for that I’m sorry,” he told the broadcaster. “I do have great faith in both the scientific community and the regulatory community at the UK.”

The US’s Food and Drug Administration (FDA) is due to meet next week to consider approval for the vaccine, with officials predicting that 100 million Americans will be vaccinated by February.

Meanwhile, president-elect Joe Biden said that he would encourage Americans to wear mask during his first 100 days in office.

“Just 100 days to mask. Not forever – 100 days. I think we’ll see a significant reduction if that occurs with vaccinations and masking to drive down the numbers considerably.”

He also said he would be willing to receive a vaccine publicly following a similar promise from former presidents to help combat any public scepticism towards vaccination.

Mr Biden also confirmed that Mr Fauci had agreed to act as the chief medical adviser in the incoming administration, in addition to his role as head of the National Institute of Allergy and Infectious Diseases.

Mr Biden addressed the economic impact of the pandemic at a press conference in Delaware on Friday following disappointing job figures.

Data released showed that the US economy added 245,000 jobs in November – a much lower figure than had been expected, illustrating the depth of the economic challenge facing the US as it tries to emerge from the pandemic.

Mr Biden urged Congress to agree to a Covid relief package to help workers and the economy. “Americans need help and they need it now,” he said, adding that he was “encouraged” by the recent bipartisan proposal for a $900 billion package.

“The sooner we pass the funding, the sooner we can turn the corner on Covid-19. Congress and President Trump have to get this deal done for the American people,” he said, though he said that Congress would also need to act in January.

Asked about plans to distribute vaccines, Mr Biden said there was “no detailed plan” from the current administration to get a vaccine “out of a container into an injection syringe”.

He said there had to be “equity” in the way the vaccine was distributed, noting that people of colour were three times more likely to die from Covid. “We have to make sure we get that vaccine to those communities,” he said.