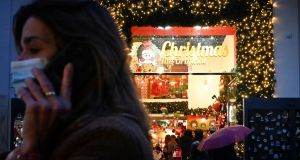 Christmas shop in Rome: With a toll of 58,000-plus, Italy has the most Covid-related deaths in mainland Europe. Photograph: Alberto Pizzoli/AFP

The Italian government’s move to ban people travelling around the country during the Christmas period has been described as a “slap in the face” to families and their deeply rooted traditions.

Italy has imposed some of the harshest Christmas rules in Europe amid calls from some scientists for more sober festivities as it overcomes a severe second coronavirus wave and tries to avoid a third one.

The rules were signed on the day Italy registered its highest daily death toll – 993 – of the pandemic. At more than 58,000, the country has the most Covid-related deaths in mainland Europe and health officials say the tightening of restrictions is essential to prevent the sort of catastrophe the nation faced during the first wave in the spring.

People will be barred from travelling between regions from December 20th until January 6th except for work, health or emergency reasons. Furthermore, they will not be able to leave their towns on Christmas Day, St Stephen’s Day or New Year’s Day. This will prevent relatives who live in different areas from congregating on what is considered the most important occasion for family get togethers.

“Christmas is very important for Italians,” Riccardo Ciogli said outside Gatsby Cafe in Rome’s Esquilino district. “This is what we do – we get together with family, with friends, and we eat.”

His friend Erica Salvatore, who works at the nearby federation of architects, is from the southern region of Molise, where she usually spends Christmas with her parents. “I will go and see them for a few days this weekend but I don’t know if I’ll be able to travel before December 20th,” she said. “In Italy our traditions are very important, you can’t just take them away.”

Giulia Della Fratte, who also lives in Rome, said: “I kind of understand the ban on inter-regional travel but not the one between towns. Rome, for example, is made up of lots of different municipalities that are maybe only 1km apart – so how will that work? It’s nonsense.”

During a press conference on Thursday night, the prime minister, Giuseppe Conte, said “a different Christmas awaits”. He warned a third wave could strike as early as January. “It is an essential caution to protect our loved ones,” Mr Conte added.

Although the infection curve has been flattening and hospital admissions declining, the main concern is a resurgence of cases once the Christmas and new year festivities are over, as happened after a summer of mostly unbridled travel and socialising.

The rules will run alongside a 10pm-5am national curfew – extended until 7am on New Year’s Day. Ski resorts will remain closed until January 7th, while those who travel abroad between December 21st and January 6th must quarantine for 14 days upon their return.

Bars and restaurants in the majority of Italy’s 20 regions are closed as part of a “red, orange and yellow” tiered system of restrictions adopted in early November. As the infection curve slows, Mr Conte said all regions would be in the yellow zone within a few weeks, meaning bars and restaurants could stay open until 6pm, including on Christmas Day and St Stephen’s Day.

But this has brought little comfort to restaurant owners. “As a businessperson I am extremely angry,” said Valentina Santanicchio, a chef whose restaurant, Capitano del Popolo, in Orvieto has been closed since the Umbria region was placed in the orange zone last month. “Listening to Conte’s press conference, there wasn’t a word of solidarity towards the thousands who can’t work right now or who have lost jobs. And as a citizen, the Christmas travel ban is a slap in the face to families and their feelings.”

The Christmas restrictions were criticised by regional governors, who claimed in a joint statement that they were not consulted about curbs that they said were too harsh on families. Matteo Salvini, the leader of the far-right League party, said: “These families must remain divided even at Christmas. This is yet more proof that the government does not know Italy.” – Guardian