Lebanon has failed to implement any key reforms, says France 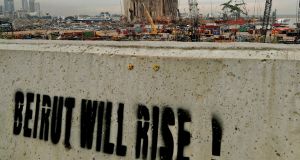 Lebanon has not implemented any of the reforms in the roadmap presented by President Emmanuel Macron last September, France said on Wednesday, ahead of a virtual conference intended to raise funds for the crisis-hit country.

Money raised during the conference will be dispersed via local and foreign aid organisations, rather than bailing out the government, which has been refused $21 billion in international funds due to mismanagement, corruption and refusal to yield power.

Mr Macron issued his roadmap during a visit to Beirut after the country’s worst peacetime disaster on August 4th, when an explosion devastated Beirut’s port and nearby neighbourhoods, killing 204, wounding 6,000 and rendering 300,000 homeless.

The government of Hassan Diab resigned over the blast, which was caused by more than 2,000 tonnes of ammonium nitrate stored at the port. Mr Diab has remained as caretaker prime minister but does not have the political strength to carry out the roadmap.

The Macron plan, which had an end-of-year deadline, called for the formation of a new government of independent experts to rescue the economy, an audit of the central bank, a new electoral law and anti-corruption measures.

Instead of addressing the roadmap, the political class has squabbled over the formation of a new cabinet under veteran incoming premier Saad Hariri, who has drafted a list of 18 potential ministers. President Michel Aoun has insisted, however, that ministers should be chosen by parliamentary blocs.

In a damning report titled The Deliberate Depression, the World Bank says that “a year into Lebanon’s severe economic crisis, deliberate lack of effective policy action by authorities has subjected the economy to an arduous and prolonged depression”.

The bank estimates the economy will contract 19.2 per cent this year and by a further 13.2 per cent in 2021. “As things stand, Lebanon’s economic crisis is likely to be deeper and longer than most economic crises,” the bank states.

He urged the prompt formation of a government capable of implementing short-term emergency measures and addressing long-term structural problems.

Lebanon’s economic crisis began in mid-2019, was exacerbated by nationwide anti-regime protests and accelerated by the coronavirus pandemic, which has infected 129,000 and killed 1,000.

In spring Lebanon defaulted on a $1.2 billion eurobond repayment and its banks imposed capital controls, which failed to stem the downward slide.

Rising inflation, the 80 per cent fall in the value of the currency and soaring unemployment have increased poverty to 55 per cent, initiating a brain drain of youth who feel they have no future in Lebanon.