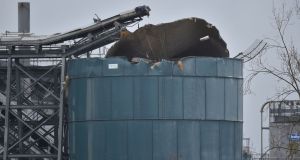 The scene in Avomouth, Bristol, where fire crews, police and paramedics are responding to a large explosion at a warehouse. Photograph: Ben Birchall/PA Wire

Four people have died following an explosion at a wastewater treatment works near Bristol.

A major incident was declared at Wessex Water’s Bristol water recycling centre in Kings Weston Lane, Avonmouth, after reports of a “large explosion” on Thursday.

Among those killed were three employees of Wessex Water and one contractor, Chief Inspector Mark Runacres, from Avon and Somerset Police, said.

Speaking at a press conference at the scene, he said: “Emergency services were called at approximately 11.20am to reports of a large explosion involving one of the chemical tanks at the site off Kings Weston Lane.

“The fire service led the rescue operation but sadly, despite the best efforts of all those involved, we can confirm there have been four fatalities. This includes three employees of Wessex Water and one contractor.

“Specially trained officers have this afternoon made contact with each of the families of those individuals and informed them of the sad news.

“This is a tragic incident and our thoughts and sympathies go out to them.”

He added that there was no ongoing public safety concerns following the explosion, which he said happened in a silo that held treated biosolids before they were recycled to land as an organic soil conditioner.

A fifth person was also hurt in the blast but their injuries were not believed to be life-threatening.

British prime minister Boris Johnson said “our hearts go out” to the victims and their families.

“Deeply saddened to learn that four people have lost their lives in the water works explosion in Avonmouth,” he said on Twitter.

“Our hearts go out to the victims and their families.

“Thank you to the emergency services who attended the scene.”

Labour leader Sir Keir Starmer also gave his condolences on Twitter, writing: “My thoughts are with all those who tragically lost their lives today in Avonmouth. My heart goes out to their friends and family.

“Thank you to our emergency services for all their work.”

Wessex Water chief executive Colin Skellett said the company was “absolutely devastated” by the incident, and said it would be working with the Health and Safety Executive “to understand what happened and why”.

Seán Nolan, who witnessed the aftermath of the explosion, said he had heard a “boom and echo” but thought it was a vehicle collision.

“I heard what I thought may have been two trucks colliding by the way it shook the ground . . . it was big,” he told the PA news agency.

“I continued doing what I was doing, but a couple of the lads came out to see if I was alright.”

Mr Nolan said there had been “a lot of commotion” in the minutes immediately after, but the incident itself had been “quite short-lived”.

“There were a lot of sirens coming in and some helicopter activity above as well,” he said.

“It [the helicopter] was circling for a good hour or so.

“It was quite short-lived, I’d say about two or three seconds. Sort of a boom and echo and then it just went quiet.

Jawad Burhan took a photo showing a tank that had exploded after the blast.

He told the PA news agency there was a “helicopter looking for missing people” and police had closed a nearby road leading up to the building.

“I heard the sound, I’m working beside the building in another warehouse,” he said.

“After 10 minutes I saw the helicopter coming and the police.”

Darren Jones, MP for Bristol North West, said: “This is a serious incident and my thoughts are with those workers who have injured on site today.” – PA