Documents emerge as Donald Trump considers pardons for his children 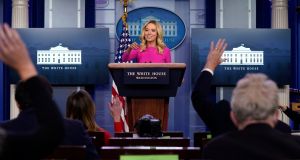 The US Justice Department investigated a cash-for-pardons scandal involving the White House according to documents filed in a federal court, amid reports that President Donald Trump is weighing further pardons before his presidential term ends.

The heavily-redacted filing lodged in the Washington DC court, shows that federal prosecutors as recently as August investigated the proposed scheme in which individuals approached senior White House officials offering money in exchange for a pardon for someone who was in prison.

The development emerged as the New York Times reported that Mr Trump has considered pardoning his three eldest children and son-in-law Jared Kushner, as well as his personal lawyer Rudy Giuliani, before he leaves office on January 20th.

Mr Trump’s son Donald jnr was investigated during the Mueller investigation, while Mr Kushner gave erroneous information to officials for his White House security clearance, though neither was charged.

Presidential pardons are a feature of the final months of most presidencies. Last week Mr Trump pardoned his former national security adviser Mike Flynn who twice admitted lying to the FBI.

The president continued to claim yesterday on Twitter that he would “win” the election, despite losing last month’s contest to his Democratic rival Joe Biden. “We will win!” he declared on Twitter.

Asked at a press briefing in the White House if Mr Trump still believed he had a path to victory, press secretary Kayleigh McEnany said that he is “just looking for every legal vote to be counted”.

Ms McEnany was speaking after attorney general Bill Barr said in an interview on Tuesday that the justice department had uncovered no election fraud “on a scale that could have effected a different outcome in the election”.

His comments to the Associated Press were some of the strongest indications yet from a senior cabinet member that Mr Trump’s claims that he may still win the election are unfounded.

In Georgia, a local election official excoriated Mr Trump for failing to condemn threats against election staff, as the president continues to dispute the outcome of the election there and ahead of two senate elections next month.

Mr Trump is due to campaign for both Republican candidates in the January 5th run-offs on Saturday in Georgia. He described the event as a “rally” yesterday on Twitter.