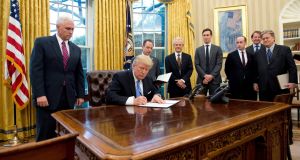 US president Donald Trump, surrounded by aides, signs the first of three executive orders in the Oval Office at the White House on Monday. Photograph: EPA/Ron Sachs

Donald Trump has moved to pull the United States out of the proposed Trans-Pacific Partnership trade pact, fulfilling a campaign promise as he began his first full week in office.

As he signed a notice in the Oval Office, Mr Trump said: “Great thing for the American worker that we just did.”

The new US president also signed memorandums freezing most federal government hiring – though he noted an exception for the military – and reinstating a ban on providing federal money to international groups which perform abortions or provide information on the option.

The regulation, known as the “Mexico City Policy”, has been a political volleyball, instituted by Republican administrations and rescinded by Democratic ones since 1984.

Following a tumultuous first weekend in office – consumed by Mr Trump’s criticism of the media’s inauguration coverage – the president sought to refocus on the sweeping, yet often vague, promises he made as a candidate.

He campaigned as a fierce opponent of multilateral trade agreements, particularly the 12-nation Pacific Rim deal agreed upon by his predecessor, Barack Obama.

Earlier, Mr Trump spoke with business leaders and warned he would impose a “substantial border tax” on companies that move their manufacturing out of the United States.

He also promised tax advantages to companies which produce products domestically. “All you have to do is stay,” he said during a meeting in the White House’s Roosevelt Room.

Tesla CEO Elon Musk and Marillyn Hewson of Lockheed Martin were among the executives who attended the meeting.

The gathering kicked off a busy day for the new president, including an evening reception with politicians from both parties and a sit-down with union leaders.

Since winning the White House, he has targeted companies which have moved factories overseas, vowing to slap taxes on products they then try to sell in the US. “Some people say that’s not free trade, but we don’t have free trade now,” said Mr Trump.

The president also reiterated his campaign pledge to lower taxes for companies, as well as the middle class, “anywhere from 15 to 25 per cent”.

He also called for cutting 75 per cent of federal regulations – and insisted that doing so would not compromise worker safety.

The developments came after a first weekend in the White House that included lambasting news organisations for correctly reporting on the size of the crowds at his inauguration and mass protests against his presidency on the following day.

Mr Trump also spoke with Israeli prime minister Benjamin Netanyahu, who accepted an invitation to visit the White House in early February. The prime minister said he is hoping to forge a “common vision” with the newly inaugurated US president which could include expanded Israeli settlement construction and a tougher policy toward Iran.

Mr Trump also announced he has set up meetings with Canadian prime minister Justin Trudeau and Mexican president Enrique Pena Nieto. Mexico is part of the free trade agreement with the US and Canada.

Mr Trump said he will also discuss immigration and security at the border. He has promised to build a wall along the length of the southern US border, and has insisted that Mexico will pay for it.

Later in the week, he will address congressional Republicans at their retreat in Philadelphia and meet UK prime minister Theresa May.