‘Gambia is in financial distress. The coffers are virtually empty,’ says Barrow advisor 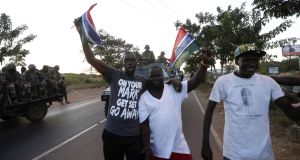 Exiled Gambian ruler Yahya Jammeh has been accused of stealing millions of dollars in his final weeks in power, and shipping out luxury vehicles by cargo plane.

Mai Ahmad Fatty, a special adviser for the new president, said Mr Jammeh made off with $11 million(€10.26m) during a two-week period alone.

Meanwhile, a regional military force rolled in, greeted by cheers, to secure the West African nation so that democratically elected president Adama Barrow could return home.

He remained in neighbouring Senegal, where he took the oath of office on Thursday because of concerns for his safety.

At a press conference in the Senegalese capital, Mr Barrow’s special adviser Mai Ahmad Fatty told journalists that the president “will return home as soon as possible”.

Underscoring the challenges facing the new administration, Mr Fatty revealed the disappearance of the $11 million.

He said that is only what they have discovered so far since Mr Jammeh and his family took an offer of exile after more than 22 years in power and departed late on Saturday.

“The Gambia is in financial distress. The coffers are virtually empty. That is a state of fact,” Mr Fatty said.

“It has been confirmed by technicians in the ministry of finance and the Central Bank of the Gambia.”

Mr Fatty also confirmed a Chadian cargo plane had transported luxury goods out of the country on Mr Jammeh’s behalf in his final hours in power, including an unknown number of vehicles.

He said officials at the Gambia airport have been ordered not to allow any of Mr Jammeh’s belongings to leave.

Separately, it appeared that some of his goods remained in Guinea, where Mr Jammeh and his closest allies stopped on their flight into exile.

Mr Fatty said officials “regret the situation,” but it appeared that the major damage had been done, leaving the new government with little recourse to recoup the funds.

The unpredictable Mr Jammeh was known for startling declarations like his claim that bananas and herbal rubs could cure Aids.

He went into exile under mounting international pressure, with a wave to supporters as soldiers wept.

He is now in Equatorial Guinea, home to Africa’s longest-serving ruler and not a state party to the International Criminal Court.

Mr Jammeh lost an election in December to Barrow, and at first conceded defeat, before challenging the vote.

That appeared to be the final straw for the international community, which had been alarmed by his moves in recent years to declare an Islamic republic and leave the Commonwealth and the ICC.

Mr Barrow will now begin forming a Cabinet and working with Gambia’s national assembly to reverse the state of emergency Mr Jammeh declared in his final days in power.

He will also launch a truth and reconciliation commission to investigate alleged human rights abuses by Mr Jammeh’s regime.

Rights groups say those include arbitrary detentions, torture and even killing of opponents.

“After 22 years of fear, Gambians now have a unique opportunity to become a model for human rights in West Africa, ” said Amnesty International’s deputy director for West and Central Africa, Steve Cockburn.

The regional military force that had been poised to force out Mr Jammeh if diplomatic efforts failed rolled into Gambia’s capital, Banjul, on Sunday night to secure it for Mr Barrow’s arrival.

Hundreds greeted the force’s approach to State House, cheering and dancing, while some people grabbed soldiers to take selfies.

With Mr Jammeh gone, a country that had waited in silence during the crisis sprang back to life.

Shops and restaurants opened, music played and people danced in the streets.