Janan Ganesh: Taking to the streets won’t change a thing 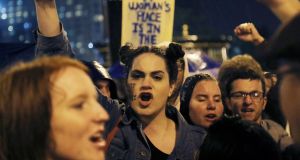 For unclear reasons, perhaps to do with the youth of the crowds, protests tend to the cultural over the material. Photograph: Jim Wilson/The New York Times

The Oasis concerts at Knebworth in 1996 were the “last great gathering of the people before the birth of the internet”, mused Noel Gallagher, the band’s former songwriter, recently. After that, technology fragmented culture. Mass events gave way to bespoke entertainment. “It is no coincidence things like that do not happen any more.”

Except they do. The marches against Britain’s EU exit last summer and Donald Trump’s US presidency last weekend had a gig feel. As serious as the crowds were about their cause, there was a social side to the throng, the online dissemination of selfies, the individuals (some only thinly political) finding identity in a collective. Recall that Jeremy Corbyn was carried to the top of the Labour Party in similar style, and it dawns that people might be turning to politics for communal experiences they no longer get from culture.

All of which has its place as long as mainstream politicians, those tasked with mounting the counter-attack against populism’s recent mastery of the ball, do not read much into it. Political protest is like sex: most of it is done by a motivated few. Braving January temperatures to assail the president of another country requires a civic commitment that is very, very rare. Crowds can deceive. Most people in 1996 were not into Oasis. Most people over the weekend were, more excusably, not marching. As a rule in politics, bet on the side that is not on the street.

Extra-parliamentary politics is about to boom despite Britain’s scant pedigree in the art, especially if EU exit takes on a provocatively “hard” form. At best, it will be ineffectual against populism’s raw tonnage of votes. At worst, it will distract moderates with false succour and associate them with some wild fringes in the eyes of a Nixonian silent majority.

These risks are not the worst of it. For unclear reasons, perhaps to do with the youth of the crowds, protests tend to the cultural over the material. Their ultimate objection to EU exit is its tinge of nativism. Their main quarrel with Trump is his attitude to women and minorities. An anti-populist march is a parade of first principles.

This vigilance in the culture wars is warranted. Even if the liberal gains of the previous century are eroded only at the edges in the years ahead, that would sour life for many. All the same, you have to question if it is the most promising line of attack against the new dispensation.

The prize, remember, is the marginal voter, the person who backed populists in 2016 but with some qualms. They were not put off by the acrid cultural taste of those campaigns. They might balk, however, at disruption to their economic life or sense of security.

Britain is about to scramble 44 years of economic enmeshment in a neighbouring colossus for external business that it could – ask the Germans – cultivate from inside the club anyway. America, the underwriter of world peace, seems set on strategic introversion and a turn against the one thing that gets all economists nodding: trade.

If events bear out the unwisdom of these ruptures, if the marginal voter is hurt by them, politics will tilt back. Populists are at their weakest in the tedious matter of sound government. In a contest of gut values and group loyalties, they have the confidence and the numbers. Why let them play at home?

Most white women heard Trump speak awfully of their sex – and voted for him anyway. The trouble with identity politics is you cannot control which identities people really cherish. Everyone, by contrast, wants to be prosperous and safe. Moderates can stand for these fundamentals or lose themselves in counterculture, not both.

“The future belongs to crowds,” wrote Don DeLillo in his novel Mao II. The wryness of the quote has been lost over the years. He was contrasting the fervour of a mass religious wedding at Yankee Stadium with the banality of life outside, where people “smell their shirts and drop them in the hamper”. Who could not side with the collective spectacle?

Most people, actually. The marginal voter was doing some hamper management over the weekend. The marginal voter has never been on a march and might be unnerved by zealous multitudes. The future of the mainstream is not in crowds or “community organising” or a “new kind of politics”.

It is in patience as events take their course. Populist propositions are about to be tested. By the time reality is through with them, a reputation for dull competence will be precious stock in politics. The trick is not to forfeit it in the meantime for the transient glamour of the street.