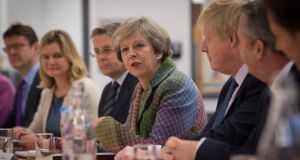 Theresa May has promised a bigger role for government in boosting productivity, improving skills and promoting key industrial sectors after Britain leaves the European Union. Launching a discussion document on industrial strategy after a cabinet meeting in the northwest of England, the prime minister said such intervention could help to create a stronger, fairer economy after Brexit.

“One of the themes that underpins what we are doing in the industrial strategy and underpins our plan for Britain, is ensuring we drive growth across the whole of the UK, that we ensure that we are building on the strengths of different parts of our economy and different parts of the UK, and that we see prosperity and opportunity spread across the country so everybody has those opportunities to get on in life,” she said.

Ms May said that companies would be encouraged to work together to strike sector-wide deals targeting new opportunities and identifying difficulties, similar to initiatives already in place in the aerospace and automotive sectors. The government would ease regulations which inhibit growth and use new trade deals after Brexit to boost exports. Leaving the EU will allow Britain to make special deals with companies and sectors without the constraint of EU state aid rules.

The green paper suggests an initial focus on life sciences, ultra-low-emission vehicles, industrial digitisation, the nuclear industry and the creative industries. A new system of technical education and more support for STEM (science, technology, engineering and maths) skills, digital skills and numeracy would help improve Britain’s poor skills base. This could be increasingly important if restrictions on immigration from the EU are imposed after Brexit.

The green paper also proposes greater investment in digital, energy, transport, water and flood defence infrastructure and a framework to build on the particular strengths of different parts of the country and address factors that hold certain regions back.

Welsh political leaders on Monday called for full access to the European single market after Brexit and a new immigration policy linking freedom of movement for EU citizens to whether migrants have a job. A white paper published by Welsh first minister Carwyn Jones and Plaid Cymru leader Leanne Wood also warned that Wales could be disadvantaged if a special deal was agreed for the Irish Border.

“Should the land border between Northern Ireland and Ireland be treated differently from movement between EU Member States and the rest of the UK, this could impact on trade patterns and freight movement between UK and Ireland. If importers/exporters choose to move their products via Northern Ireland, this could disproportionately affect Wales, as proportionally more traffic to Welsh ports comes from Ireland compared to the rest of Great Britain,” it said.

The white paper called for Wales to continue to have access after Brexit to EU programmes that promote economic co-operation with countries such as Ireland.

“When the UK leaves the EU this form of co-operation will become, if anything, even more important and, in particular, we are committed to strengthening the relationship between Wales and Ireland. Wales especially needs to build prosperity around our key ports – Holyhead, Fishguard and Pembroke Dock – and protect their roles as the main arteries to and from Ireland and Wales (and, indeed, the UK as a whole),” it said.