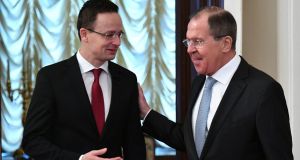 Ahead of a visit by Russian leader Vladimir Putin next week, Hungary has urged the European Union to rebuild relations with Moscow and backed new US president Donald Trump to lead a rapprochement between east and west.

Mr Putin will make a rare trip to the European Union when he visits Budapest on February 2nd to meet Hungarian prime minister Viktor Orbán, with whom he shares hopes that Mr Trump will radically change the geopolitical landscape.

Russia’s annexation of Crimea in March 2014 and backing for separatists in a continuing conflict in eastern Ukraine badly damaged Moscow’s relations with the west, but Mr Orbán has maintained good ties with Mr Putin, deepened their countries’ business links and criticised EU sanctions against Moscow.

“For us it is a very positive sign, that the American administration could improve Russian-American relations in the coming years,” Hungarian foreign minister Péter Szijjártó said during a visit to Moscow on Monday.

“For us it also means that European-Russian relations will also improve, which is very important for Hungary,” he was quoted as saying by Russia’s Tass news agency.

Mr Orbán was the first European leader to openly back the election bid of Mr Trump, who has spoken highly of Mr Putin and called for better US-Russia relations.

Mr Szijjártó said Hungary was “looking forward to [Mr Putin’s] visit because of the rapid change in the international situation”.

“With the arrival of a new administration in the United States comes a possibility to look at things from a different angle,” he said.

“If the US starts to build international relations on a bilateral basis, if China becomes stronger, and against this backdrop the EU cannot build constructive relations with Russia, then the EU will be left behind in the international arena.”

Mr Szijjártó said that any “conflict between Russia and the EU would have extremely serious consequences for Hungary . . . therefore it is important to us that west and east co-operate positively, decently and pragmatically”.

Russian foreign minister Sergei Lavrov, who held talks with Mr Szijjártó in Moscow, said they would continue “the constructive dialogue that in recent years has developed between Russia and Hungary in all areas”.

Despite the deep freeze in EU-Russia relations, Mr Orbán and Mr Putin have continued to visit each other in recent years, and are pressing ahead with a controversial deal for Russia to build two new nuclear reactors at Hungary’s Paks atomic power station.

Moscow is financing the bulk of the project with a €10 billion loan, which critics say buys the Kremlin long-term influence in Hungary. Opponents also ask why the contract was granted to a Russian state firm without a tender, and why details of the deal have been classified as “secret” for 30 years.

Mr Szijjártó also accused the previous White House administration of Barack Obama of meddling in Hungary, which has faced recent US criticism over everything from a perceived rise in anti-Semitism to the threat that the populist Mr Orban allegedly poses to the country’s rule of law, democracy and free media.

In Budapest on Monday, Mr Orbán hailed Mr Trump’s pledge in his inaugural address to build relations “with the understanding that it is the right of all nations to put their own interests first”.

“We have received permission from, if you like, the highest position in the world so we can now also put ourselves in first place. This is a great thing, a great freedom and a great gift,” said Mr Orbán.

He regularly rails against what he calls EU interference in Hungary’s affairs, and refuses to accept refugees under a resettlement scheme that is aimed at easing Europe’s migration crisis.