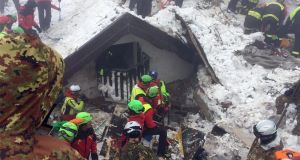 Soccorso Alpino volunteers and rescuers at work in the area of the hotel Rigopiano in Farindola, Abruzzo region on Monday. Photograph: Soccorso Alpino/EPA 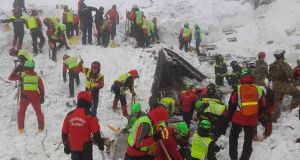 Rescue teams working at the avalanche-hit Hotel Rigopiano, near the village of Farindola, on the eastern lower slopes of the Gran Sasso mountain. Italian rescuers pulled nine survivors from the hotel. Photograph: CNAS/AFP

Italian authorities are facing questions on whether they underestimated the risks facing a snowbound mountain hotel hours before an avalanche hit.

Rescue crews using heavy equipment are trying to reach 23 people who are still buried under the snow in the Hotel Rigopiano in central Italy.

Five days after up to 60,000 tonnes of snow, rocks and uprooted trees ploughed the hotel, rescue crews are still digging by hand and with shovels and chainsaws to try to find more survivors.

Firefighters’ spokesman Luca Cari said emergency crews are working with an “operational hypothesis” that the snow might not have reached all parts of the hotel, and that air pockets might still be keeping people alive.

But he added: “We are fighting against time.

“We know we need to work fast, but in relation to an environment that doesn’t allow for fast intervention.”

Heavy machinery has reached the disaster site north-east of Rome, but crews have not decided whether to use it, given the risk that it could collapse snow and walls on top of the 23 people underneath.

So far, nine people have been pulled out alive from the debris, with the first released from the Pescara hospital on Monday. Six people are confirmed dead, although one body remains trapped inside the rubble.

Meanwhile, government officials were pressed on whether they underestimated the threat facing the hotel, which was already covered with 1.82 metres (6ft) of snow, had no phone service and dwindling gas supplies when a series of earthquakes rocked central Italy on the morning of January 18th.

Italian newspapers reproduced what they said was an email sent by the hotel owner to local and provincial authorities that afternoon asking for help because “the situation has become worrisome”.

“The hotel guests are terrorised by the earthquakes and have decided to stay out in the open,” Bruno Di Tommaso wrote.

“We’ve tried to do everything to keep them calm, but since they can’t leave due to the blocked roads, they’re prepared to spend the night in their cars.”

The Pescara prefect’s office faced criticism after a local restaurant owner said his calls reporting the avalanche were ignored. Quintino Marcella said he called the office after receiving word from one of his chefs who was staying at the Hotel Rigopiano and escaped the avalanche by chance.

The prefect’s office reportedly called Mr Di Tommaso after receiving the avalanche alarm, but that the hotel owner — who was in coastal Pescara at the time, not in the hotel — had not heard anything himself, possibly leading officials to underestimate Mr Marcella’s report.

The president of the province, Antonio Di Marco, has confirmed he saw an email from Mr Di Tommaso and had arranged for a snowplough to clear the road that night, the ANSA news agency reported. The avalanche, however, hit sometime before 5.40pm, when Mr Marcella received the call from his chef.

One aspect of the criminal investigation into the disaster involves discovering where the province’s snowploughs were being used, reports said.