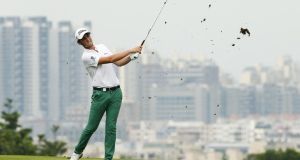 Genzon Golf Club in Shenzhen: Long known as “green opium” in China the Communist Party has had a love-hate relationship with golf over the years. Photograph: Lintao Zhang/Getty

As the famously golf-loving Donald Trump tees up his US presidency, China is driving a renewed crackdown on the game famously detested by Mao Zedong as a symbol of all that was wrong with capitalism. Official state media has reported how a crackdown has shut 111 of China’s 683 golf courses in efforts to conserve water and land over the past five years, and cadres have been ordered to stay off the links.

Long known as “green opium” in China, the Communist Party has had a love-hate relationship with golf over the years, encouraged by its real estate benefits but obviously appalled by its decadent bourgeois overtones. Golf courses have been problematic, as many were arable land granted by local cadres to property developers, who build plush villas in the suburbs of China’s expanding cities, then put a small golf course on the side to justify their existence.

Some 18 golf courses have been ordered to return and restore illegally developed land, while 47 have been told to stop construction or business activities. These courses were found to be illegally using large amounts of arable land or nature reserve areas, or extracting groundwater in prohibited areas, among other illicit behaviours, the Xinhua news agency reported.

The central government has ordered “rectification” of the remaining 507 golf courses, of which 11 have been voluntarily closed by operators, according to China’s economic planning agency, the National Development and Reform Commission.

China imposed a ban on the construction of new golf courses in 2004, back when there were fewer than 200 golf courses in the country, to protect land and water resources. Nevertheless, the number of courses continued to rise as the sport gained popularity, especially in business and official circles.

During the period before Xi Jinping became general secretary of the party, golf flourished among the nouveau riche and become synonymous with the gold watch-buying, expensive wine-tippling, Porsche SUV-driving cadres who were enjoying the benefits of selling state land to property developers. However, President Xi launched a broad corruption crackdown and many party functionaries were required to stow their golf bags in the attic.

In April last year, the party said that golf was no longer a crime but warned that cadres wanting to get out on the links could be in breach of anti-corruption rules.

The biggest golf resort in the world is at Mission Hills near the southern boomtown of Shenzhen, which has 12 courses, including a signature course by Jack Nicklaus. There are golf courses in all Chinese provincial-level regions except Tibet, according to the development commission.