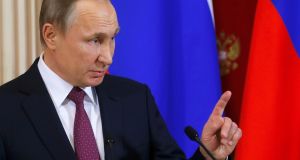 Russia’s president Vladimir Putin, who has overseen the emergence of a traditionalist ideology during his third term in office. Photograph: Sergei Ilnitsky/Reuters

As huge crowds in the US took to the streets to flag women’s rights at the weekend, Russia was preparing to block an outbreak of similar rallies on its territory. Moscow authorities have refused to grant permission for a demonstration in the city centre against proposed legislation that would decriminalise domestic violence, saying the meeting would disrupt pedestrian and traffic flows.

Rights activists are demanding the overturn of a bill approved by the Russian parliament, the Duma, at a first reading earlier this month, that would downgrade domestic battery from a criminal to an administrative offence and soften sanctions for first-time offenders. A second reading is expected later this week.

Yelena Mizulina, an ultra-conservative Russian MP who tabled the bill, said it was ridiculous to brand people as criminals for “a slap”. However critics of the so called “slapping law” say it will set back efforts to tackle the endemic problem of domestic violence in Russia and let abusers off the hook.

Russian official statistics say that 40 per cent of all serious violent crime takes place in the home. Independent research cited by Human Rights Watch shows the problem to be even more serious. One study in 2013 found that more than 80 per cent of violent crimes against women in Russia were committed by spouses or intimate partners.

A total of 368 parliamentary deputies voted in favour of the bill in early January that would make less extreme violence within families punishable by a fine rather than a jail sentence. One deputy voted against the bill and one abstained. The bill goes to the heart of family values covering both parents’ treatment of their children and spouses’ treatment of each other.

Ms Mizulina, who is famous for having promoted Russia’s anti-gay propaganda law in 2013, has been lobbying for the reversal of a legal amendment adopted last year that criminalised domestic violence.

Russian tolerance for violence in the home has its roots in a 16th-century literary work named Domostroi, or Domestic Order, that advocates patriarchal tyranny. Believed to have been edited by the confessor of Russian tsar Ivan the Terrible, the book recommends beating children “to save their souls” and harsh discipline for wives and daughters. “If women do not fear men or do not do what their husbands or fathers tell them, then whip them with a lash according to their guilt, though do so privately, not in the public eye.”

Although Russians bristle at mention of this medieval text today, promoters of the traditionalist ideology that has emerged during Vladimir Putin’s third presidential term still advocate stern paternal authority in the home. “In Russian traditional families, the relationship between parents and their children is built on authority and power,” Ms Mizulina told the Duma. “The law should support that family tradition.”

Thorbjorn Jagland, secretary general of the Council of Europe, appealed to Russian politicians to drop the planned legislation. “I call upon you to do anything within your powers to strengthen the right of Russian families to live free from violence and intimidation,” he said.

A Russian politician said that the domestic violence bill was likely sail through a second and third readings in the Duma without significant amendments before being passed to the Federation Council, the upper chamber of the parliament, for final approval.