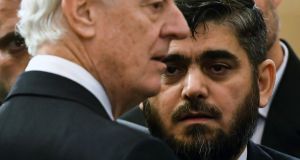 Rebel fighters meeting the Syrian government for the first time in the country’s bloody six-year civil war appear to have rejected a plan for Iran to play a role in monitoring the current ceasefire.

The negotiations sponsored by Russia, Iran and Turkey in the Kazakh capital, Astana, are the latest attempt to end the war and seen as a test of Moscow’s influence in the Middle East.

The proposal for a trilateral ceasefire commission, overseen jointly by the talks’ sponsors, is the most specific new measure set out in a draft communique the Russians hope to release on Tuesday, the second and closing day of the talks. It was not clear if the monitoring body could go ahead without Iranian involvement.

The Syrian fighting groups believe militia linked to Iran, such as Lebanon’s Hizbullah, are – along with Bashar al-Assad’s government – systematically breaching the ceasefire agreed on December 29th. The Syrian fighters believe Iran, as perpetrators of innumerable ceasefire breaches, cannot credibly monitor or enforce a ceasefire.

The debate is also raising questions whether Russia is willing in its new role as mediator in the Middle East to compromise after helping the Syrian government to victories over the rebels, something that its new ally Turkey has been urging it do.

The two sides began the talks trading insults after the rebels refused to negotiate face to face in the first session and the representative for Assad’s government described remarks by his opposite number as insolent.

Mr Alloush said the rebels were prepared to keep fighting if no deal was possible, and while a political solution to the civil war was the rebels’ preferred choice, it was not the only one. “We came here to reinforce the ceasefire as the first phase of this process,” he said. “We will not proceed to the next phases until this actually happens on the ground.” He described the Syrian government as a “terrorist entity”.

As well as the ceasefire commission proposal, the leaked draft communique also broadly supports the existing UN talks process and calls for joint action to defeat Islamic State and other terrorist groups in Syria.

For the first time in Syrian peace talks, the opposition delegation has been drawn from the armed rebel groups rather than their political representatives. The talks are designed to build on the fragile ceasefire that came into force in late December after the fall of the rebel stronghold of east Aleppo.

Mr Alloush said in his opening remarks that the presence of Iranian-sponsored militias alongside regular Syrian government troops made peace more difficult to achieve, and called for them to leave the country. He also called for the release of prisoners from government jails, saying 13,000 women were being held arbitrarily. Mr Alloush insisted that the political process would begin with the departure of Bashar al-Assad, Iran, and their militias – a set of demands that put the opposition at total loggerheads with the regime.

His remarks were denounced as insolent by Bashar al-Jaafari, the leader of the Assad delegation and the Syrian ambassador to the UN.

In his opening statement, Mr Alloush said the opposition was focused on bolstering the nationwide truce.

“We came here to reinforce the ceasefire as the first phase of this process,” he said. “We will not proceed to the next phases until this actually happens on the ground.”

A rebel spokesman said the first negotiation session was not held face-to-face because of the regime’s continued bombardment and attacks on an area near Damascus.

UN special envoy Staffan de Mistura, who is in Astana, said he hoped the talks would lead to UN-led negotiations based on security council resolutions. Mr de Mistura, who is due to hold UN talks on February 8th in Geneva, spent much of last year involved in lengthy and ultimately unsuccessful talks on how to enforce ceasefires, including the monitoring and enforcement mechanisms in the event of violations.

Adjudicating on ceasefire violations is made more complex by the fact that some rebels fight alongside groups not party to the ceasefire, giving Russia and Syria an alibi to continue with a wider bombardment.

Russia believes the Astana talks could prove more fruitful than previous efforts, partly because former US president Barack Obama’s administration is not involved, but also because the opposition has been weakened by defeat in Aleppo and because Turkey, once a hardline opponent of Mr Assad, has recognised that his departure from office is no longer a precondition for political talks starting.

At the opening of the first session, attended by all the delegations, the Kazakh foreign minister, Kairat Abdrakhmanov, said the talks were designed to complement and not supplant the UN talks process.

Hossein Jaberi Ansari, the head of the Iranian delegation, said: “We have to maintain the unity and independence of Syria and only the Syrian people have the right to decide their own future.”

His remarks were designed to underscore Iran’s commitment to keeping Mr Assad in power.

Mr Jaafari had insisted that the negotiations could not involve Turkey directly since the country was operating on Syrian sovereign territory.

A source close to the regime representatives said: “The government delegation took part in the Astana meeting on the basis that the agenda would include reinforcing the ceasefire and discussing the principles of a political solution.”

The Astana talks are a major test of Russian influence in the Middle East, including its new partnership with Turkey. The rapprochement, which saw Russia and Turkey conduct their first joint air strikes against Islamic State targets in Syria last week, was brought about in part by the US refusal to distance itself from Syrian Kurds, as demanded by Ankara.

US president Donald Trump’s administration has yet to develop a detailed Syrian policy, but it is likely to be focussed on the defeat of Islamic State, rather than the removal of Mr Assad.