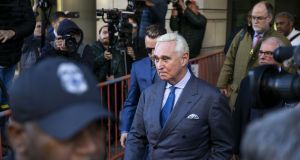 Roger Stone: ordered by a judge not to publicly discuss the details of his criminal case. Photograph: Al Drago/Bloomberg

Longtime Donald Trump ally Roger Stone has been ordered by a judge in Washington not to publicly discuss the details of his criminal case, after he posted a picture on his Instagram account of the judge overseeing his trial.

At a US district court hearing on Thursday in Washington DC Judge Amy Berman Jackson imposed a gag order on the 66-year-old operative, claiming that his explanation for the Instagram post “rang hollow”.

A picture of Ms Jackson with what appeared to be crosshairs of a gun beside her head was posted to Mr Stone’s Instagram account on Monday.

The accompanying text read: “Through legal trickery Deep State hitman Robert Mueller has guaranteed that my upcoming show trial is before Judge Amy Berman Jackson, an Obama appointed Judge who dismissed the Benghazi charges again Hillary Clinton and incarcerated Paul Manafort prior to his conviction for any crime.”

Taking to the stand on Thursday, Mr Stone apologised for the post and said he did not know who had posted the picture as many people have access to his phone. He admitted, under questioning by the judge however, to have written the text accompanying the post.

“I’m sorry that I abused your trust,” Mr Stone told the judge. “I’m heartfully sorry. I can only beseech you to give me a second chance.”

He said the post was a “lapse of judgment” that was “an outgrowth of the extreme stress of the situation”.

But after taking a 15-minute break to consider her response, Ms Jackson said that she was not prepared to give Mr Stone a second chance, and ordered him to refrain from making any comments on social media, through press releases or press conferences about the case.

The defendant’s lawyers had argued in court that he depended on media appearances and public commentary to make a living. However, despite tightening the terms of his bail, Ms Jackson refrained from imposing a prison sentence on Mr Stone.

Mr Stone, who was involved in Mr Trump’s election campaign, was charged in January with witness tampering, obstruction of justice and making false statements to Congress. He is accused of misleading Congress about his knowledge of Wikileaks’ efforts to release emails hacked by Russian operatives designed to damage Mrs Clinton’s presidential campaign in 2016.

The development in the Stone case took place as Mr Trump’s former lawyer Michael Cohen met privately with senators on Capitol Hill ahead of his expected appearance in Congress next week.

Mr Cohen is expected to testify before three congressional committees – the Senate and House intelligence committees as well as publicly to the House oversight committee.

Earlier this week he was granted a request by the courts to delay the start of his prison sentence by two months until May, to allow him time to recover from shoulder surgery and to prepare for the congressional testimony.

Mr Cohen was sentenced to 36 months in prison last year by a court in Manhattan over campaign finance violations related to his role in his paying adult film star Stormy Daniels.

He was also found guilty of lying to Congress about the timing of discussions around a possible Trump hotel investment in Moscow.

Mr Cohen referenced his upcoming committee hearings on Twitter. “The schedule has now been set. Looking forward to the #American people hearing my story in my voice!” he tweeted.