R&B star R Kelly is in police custody in Chicago after turning himself. He has been charged with ten counts of aggravated criminal sexual abuse in Illinois for incidents dating back as far as May 1998. Video: Reuters 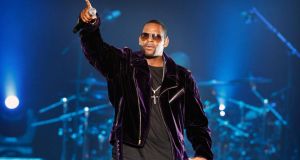 R Kelly has been charged with 10 counts of aggravated criminal sexual abuse in Illinois, according to court documents seen by the Guardian.

Numerous women have accused Kelly (52) of sexual abuse over the past 20 years but he has only appeared before a judge once.

The new charges, filed in Cook county, include nine counts that say the victims were between 13 and 15. The 10th count did not specify an age.

The singer, born Robert Kelly, could appear in court as early as March 8th.

Multiple women have accused Kelly of violent and controlling behaviour, including allegations he had sex with girls as young as 14 and brainwashed young women in what their parents described as a “cult”.

A recently aired documentary, Surviving R Kelly, featured testimony from some of these women and prompted new investigations.

The women, Latresa Scaff and Rochelle Washington, said they were teenagers in Baltimore, Maryland, when Kelly brought them back to his hotel after a concert, exposed himself to them and had sex with Scaff, who was under the influence of alcohol and marijuana.

The women said they never saw or heard from Kelly again after they left the hotel.

In 2008, he appeared before a judge after being accused of making child abuse images by filming sexual encounters, including one in which he allegedly urinated over an underage girl.

A jury was not able to identify beyond doubt the man or the girl in the video, and Kelly was acquitted. – Guardian News and Media 2019