Senator Kamala Harris clashed with former Vice President Joe Biden over issues of race relations and inequality in the US during a debate, hosted by NBC News, between democratic candidates for the 2020 presidential election. Video: NBC NEWS/TELEMUNDO 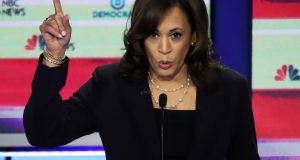 Kamala Harris’s attack on Joe Biden over his record on race is likely to be the defining moment of this debate. Photograph: Drew Angerer/Getty Images

The second night of this week’s Democratic debate in Miami always had the potential to be the more significant of the two.

Though the line-up was selected at random by the Democratic National Committee, Thursday had a higher number of high-profile candidates vying to become the Democratic nominee to take on US president Donald Trump next year.

From the get-go, the atmosphere was highly charged. Within minutes, the question- and-answers format had morphed into a back-and-forth argument between the 10 candidates, as individuals interrupted each other.

America “does not want to witness a food fight, they want to know how we’re going to put food on their table,” Kamala Harris said as a cacophony of voices erupted.

Joe Biden arrived to Miami as the front-runner. After Thursday night, he will be worried.

Eric Swalwell, the 39-year-old congressman from California, launched the first attack on the 76-year-old former vice president. “This generation is ready to lead,” he said in an early intervention, transitioning into an anecdote which described how a member of congress came to the California Democratic Convention when he was six years old and said it was time to pass the torch to the new generation.

“That candidate was then-senator Joe Biden,” he said, eliciting gasps from the audience.

“Joe Biden was right when he said it was time to pass the torch to a new generation of Americans 32 years ago. He’s still right today.”

As the camera panned to Biden he smiled, and was asked if he would like to respond. “I would. I’m still holding on to that torch,” he said, before changing the subject quickly.

But it was Harris’s attack on Biden over his record on race that is likely to be the defining moment of this debate.

“As the only black woman on the stage I would like to speak on the issue of race,” she said as other candidates were asked directly about racial injustice.

Turning to Biden, she raised the former vice president’s controversial reference earlier this month to Republican segregationists with whom he worked as an example of political civility.

“I know you’re not a racist,” she said, but she added: “It was hurtful to hear you talk about the reputations of two United States senators who built their reputations and careers on the segregation of race in this country.”

She also raised Biden’s stance in the 1970s on the practise of “bussing” whereby districts sent children by bus to segregated schools, stating that she experienced this injustice herself as a child.

Harris was the star of the night, commanding the stage for most of the evening. Asked what she would do on immigration if elected president, she confidently listed a concise series of measures, beginning with signing an executive order to give legal protection to dreamers, young people who arrived to the United States as children.

She also took the opportunity to highlight her experience as attorney general of California.

Her altercation with Biden raises questions about the viability of one of the most-rumoured tickets going into next year’s election - the possibility of Biden becoming the Democratic nominee, with 54 year-old Harris as his running-mate. “I fully intend to win this,” Harris said in an interview with MSNBC after the debate.

A good night for Buttigieg

Indiana mayor Pete Buttigieg also had a good night. The 37-year old veteran, who would be the first openly gay US president if elected, gave considered answers to questions, shining in particular in the first half of the debate. On trade, he emphasised his mid-western credentials, noting that “farmers are hurtin’”.

The mayor faced a challenging moment as he was asked by moderator Rachel Maddow about the recent controversy in his home town of South Bend, Indiana which has recently witnessed the shooting-dead of a black man by a white policeman who was not wearing a body camera. Asked why only six per cent of the local police force is black given that the population is 26 per cent black, Mr Buttigieg replied. “My community’s in anguish right now . . . It’s a mess.”

He also highlighted his own personal story at several points. While he confirmed that he did not support free education for all, because he doesn’t think that working-class Americans should subsidise the wealthiest, he said that he and his husband Chasten have six-figure student debts between them.

Though the debate opened with a question for Bernie Sanders, the former presidential candidate failed to stand out during the evening. Other candidates like former Colorado governor John Hickenlooper, self-help author Marianne Williamson and former tech entrepreneur Andrew Yang had less speaking time than others during the two-hour debate and are unlikely to have won over any new supporters.

As the curtain came down on the second night of the Democratic primary debate, it is clear that this week’s debates have ignited a new energy into the 2020 Democratic race.

One of the takeaways is that Harris has undoubtedly become a top-tier candidate, though it remains to be seen if her standing in the polls changes after Thursday’s debate.

With the Iowa caucus still more than seven months away, there remains a long road ahead in the battle to become the candidate in November 2020.