Russia has ‘no problem with LGBT persons’ but ‘some things do appear excessive’, leader says

President Donald Trump issued a light-hearted warning to Russian President Vladimir Putin against meddling in US elections, laughing and smiling as he told his counterpart not to interfere when they met at the G-20 summit in Osaka. Video: Reuters 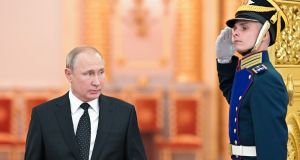 Vladimir Putin has trumpeted the growth of national populist movements in Europe and America, crowing that liberalism is spent as an ideological force.

In an interview in the Kremlin on the eve of the G20 summit in Osaka, Japan, the Russian president said “the liberal idea” had “outlived its purpose” as the public turned against immigration, open borders and multiculturalism.

Mr Putin’s evisceration of liberalism – the dominant western ideology since the end of the second World War in 1945 – chimes with anti-establishment leaders from US president Donald Trump to Hungary’s Viktor Orban, Matteo Salvini in Italy, and the Brexit insurgency in the UK.

“[Liberals] cannot simply dictate anything to anyone just like they have been attempting to do over the recent decades,” he said.

Mr Putin branded chancellor Angela Merkel’s decision to admit more than one million refugees to Germany, mainly from war-ravaged Syria, a “cardinal mistake”. But he praised Donald Trump for trying to stop the flow of migrants and drugs from Mexico.

“This liberal idea presupposes that nothing needs to be done. That migrants can kill, plunder and rape with impunity because their rights as migrants have to be protected.”

He added: “Every crime must have its punishment. The liberal idea has become obsolete. It has come into conflict with the interests of the overwhelming majority of the population.”

As the de facto ruler of Russia for almost two decades, Mr Putin (66), has been regularly accused of covertly supporting populist movements through financial aid and social media, notably in the 2016 US presidential election, the Brexit referendum and the recent European Parliament elections.

Mr Putin emphatically denied this. He dismissed the conclusion by special counsel Robert Mueller that Russia had systemically interfered in the 2016 US presidential election as “mythical interference”.

Turning to the US-China trade war and geopolitical tensions in the Gulf between the US and Iran, Mr Putin said the situation had become “explosive”. The problem, he said, stemmed from American unilateralism and the lack of rules underpinning world order.

He expressed concern about the threat of a renewed nuclear arms race between the US and Russia. “The cold war was a bad thing ... but there were at least some rules that all participants in international communication more or less adhered to or tried to follow. Now, it seems that there are no rules at all,” he said.

On a positive note, Mr Putin said there were tentative signs of a thaw in Anglo-Russian relations ahead of his meeting in Osaka with Theresa May, her farewell summit as UK prime minister. “I think Russia and UK are both interested in fully restoring our relations, at least I hope a few preliminary steps will be made.”

Relations between London and Moscow have been frozen after the attempted assassination of former Russian double agent Sergei Skripal in Salisbury, England.

The UK government blames the Russian government for the nerve agent attack, but Mr Putin said there was no evidence to support this. Mr Skripal had served a sentence in Russia before being released in a spy swap with the UK, he noted.

In recent years, Mr Putin has become emboldened, presiding over the annexation of Crimea, a pro-Russian revolt in eastern Ukraine and a military intervention in Syria which he described as a clear-cut success.

He made no mention of the fact the seven-year-old war had resulted in more than five million refugees and 500,000 dead. However, he did point to the waves of immigration from conflict zones in Africa and the Middle East which had fostered crime and social strains, in turn fuelling an anti-establishment backlash in Europe.

Echoing nationalist populists such as Mr Salvini and France’s Marine Le Pen, Mr Putin said liberal governments had not acted to reassure citizens. Instead they had pursued a mindless multiculturalism embracing, among other things, sexual diversity.

“I am not trying to insult anyone because we have been condemned for our alleged homophobia. But we have no problem with LGBT persons. God forbid, let them live as they wish,” he said. “But some things do appear excessive to us. They claim now that children can play five or six gender roles.”

“Let everyone be happy, we have no problem with that,” he added. “But this must not be allowed to overshadow the culture, traditions and traditional family values of millions of people making up the core population.” – Copyright The Financial Times Limited 2019