A technical glitch delayed the second hour of the first US Democratic party presidential debate, forcing moderators Chuck Todd and Rachel Maddow to pause and go to an ad break. Video: Reuters 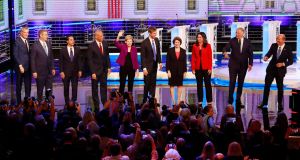 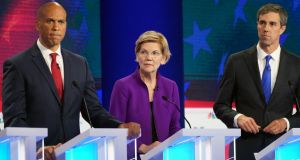 The race to become the Democratic candidate to take on Donald Trump in next year’s presidential election began in earnest on Wednesday night, with 10 candidates taking part in the first primary debate.

In a low-key event which included few references to Mr Trump and little conflict, the most dramatic moment was a technical hitch which forced NBC to cut to a commercial break after problems with back-stage microphones.

The glitch prompted Mr Trump to tweet: “NBC News and MSNBC should be ashamed of themselves for having such a horrible technical breakdown in the middle of the debate. Truly unprofessional and only worthy of a FAKE NEWS Organization, which they are!”

Mr Trump, who watched the debate on Air Force One as he travelled to Japan for the G20 summit, earlier tweeted “Boring!”

Several of the candidates highlighted their own personal story. Julian Castro, the only Hispanic candidate running for the nomination, described how he and his twin brother were brought up by a single mother. Tulsi Gabbard used her time to highlight her stint in the US military, including in Iraq, while Maryland congressman John Delaney outlined his experience as a businessman. In a nod to his El Paso roots, Beto O’Rourke began his first intervention by switching between English and Spanish.

Candidates were probed on where they stood on “Medicare for all” – essentially a government-funded healthcare programme.

.@NBCNews and @MSNBC should be ashamed of themselves for having such a horrible technical breakdown in the middle of the debate. Truly unprofessional and only worthy of a FAKE NEWS Organization, which they are!

Minnesota senator Amy Klobuchar said she favoured allowing Americans the choice to keep their private insurance. “I am simply concerned about kicking half of America off of their insurance in four years,” she said, pledging to tackle the issue of high pharmaceutical prices.

Elizabeth Warren outlined her support for a fully government-funded healthcare plan which would do away with private insurance. “I’m with Bernie on Medicare for all,” she said, referring to Vermont senator Bernie Sanders who is widely seen as a rival to Ms Warren on the left.

Mr O’Rourke said he would continue to give people the choice of private insurance, highlighting the importance of a woman’s right to choose in terms of abortion provision.

Immigration was a prominent topic, with the MSNBC moderator raising the photograph of migrants Óscar Alberto Martínez and his 23-month-old daughter Valeria lying face down on the banks of the Rio Grande, which has prompted a new debate in the United States about the Trump administration’s immigration policy.

“We saw that image today that broke our hearts,” Mr Castro said, pledging that if he becomes president it will no longer be a crime to illegally cross the border. Washington state governor Jay Inslee spoke about his state’s role in opposing Mr Trump’s Muslim ban in the early days of his presidency.

With Ms Warren the top-polling candidate among the 10 debating on Wednesday, she dominated the first hour and many of the questions touched on her signature policy issues.

Mr Castro, a former housing secretary under former USpresident Barack Obama, outperformed compared to predictions. Among his most memorable lines was “Adios to Donald Trump” as he delivered his closing statement.

Tim Ryan of Ohio was one of the few candidates to state that Democrats need to reconnect with the views of working people, while New York mayor Bill DeBlasio spoke about his father’s struggle with depression after his experience in the second World War.

There were relatively few moments of conflict in the two-hour debate, which was broadcast live across the country. In a rare moment of tension, Mr de Blasio and Mr Delaney jumped in when Mr O’Rourke was discussing healthcare. At another point, Mr Castro asked fellow Texan Mr O’Rourke if he had done his homework on immigration issues.

Wednesday night’s debate was the first real opportunity for those seeking the Democratic nomination for the 2020 election to set out their stall to the American public. The selection convention for the nominee is still more than a year away, while the first Democratic caucus will take place in Iowa in February.

Ten more candidates are due to take to the stage on Thursday, including frontrunner Joe Biden, and senators Bernie Sanders and Kamala Harris.

Polling analysis shows that four of the five top-polling candidates have been allotted the Thursday night slot, making the second night arguably the more important debate.