Boris Johnson says ministers must sign up to no-deal Brexit 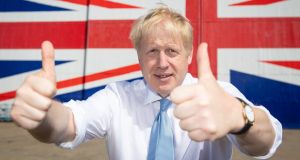 Boris Johnson has told senior Conservatives that if they are to serve in his cabinet then they will have to sign up to leaving the EU on October 31st, even if that means a no-deal exit.

The frontrunner to become Tory leader and the next UK prime minister said in an interview that his most senior ministers “would have to be reconciled” with the possibility of a no-deal Brexit on the scheduled departure date in October, even though he described that outcome as only a “very, very, very small possibility”.

“I don’t think it will happen but they would have to be reconciled to it,” he told the ConservativeHome website.

Mr Johnson’s comments suggest that some current cabinet ministers would be unlikely to serve under him, including Amber Rudd, Greg Clark, David Gauke and Rory Stewart, all of whom oppose a no-deal exit. But he added that he wanted a “broad range” of MPs in his top team.

His interview came as Theresa May, the outgoing prime minister, issued an indirect warning to Mr Johnson to avoid leaving without a deal and without the backing of parliament.

Flying to Osaka for a G20 summit, Mrs May said: “What I hope and expect is that my successor will be able to put before parliament proposals that will enable us to deliver on the vote of the British people in a way that will be good for the UK.”

She also played down the prospect of Brussels offering a better deal, adding: “The EU has made its position clear. We negotiated a good deal with the EU.”

Speaking to the BBC, Taro Kono, Japanese foreign minister, added that a no-deal Brexit would have a very negative impact” on his country’s roughly 1,000 companies in Britain. “Those operations might not be able to continue,” he said, referring to just-in-time supply chains, particularly in the car industry.

But Mr Johnson promised this week to leave on October 31st “do or die, come what may”.

Such remarks are aimed at the Conservative party’s 160,000 members, who will decide the winner of the leadership race by July 23rd, and who increasingly favour leaving the EU without any agreement with Brussels.

In his interview with ConservativeHome, the former foreign secretary said he wanted a “sensible” agreement with Brussels to give MPs an opportunity to avoid a no-deal exit, adding that if parliament voted such an accord down it would mean “enraging the electorate”.

He has also called for the UK to ramp up its preparations for a no-deal exit, to improve its bargaining position – a position echoed by Brexit secretary Stephen Barclay. “Time is of the essence and we can’t be complacent,” Mr Barclay told the Times newspaper.

But new questions were raised about the government’s Brexit approach after the civil servant in charge of no-deal planning quit to join the private sector.

Tom Shinner, the 33-year old director of policy at the Department for Exiting the EU, had been in charge of co-ordinating government departments to prevent a chaotic rupture with Europe.

The department confirmed Mr Shinner’s departure, saying: “Careful succession planning has been put in place to ensure the department maintains its high standards of delivery.”

Pro-Remain MPs are also drawing up a plan to hold back funding from Whitehall departments if the next prime minister tries to take Britain out of the EU without a deal.

Dominic Grieve, a Tory MP, has joined forces with Labour’s Margaret Beckett to draw up the plan to try to thwart a disorderly Brexit.

The pair have put forward an amendment to the routine government finance legislation known as “estimates” which take place next week. If MPs back the move, it will withhold funding from several Whitehall departments if there is a no-deal Brexit without parliament’s approval.

The move is the latest in a series of House of Commons manoeuvres as pro-EU MPs seek to prevent a no-deal Brexit. Earlier this month Labour was thwarted in an attempt to put aside parliamentary time to debate – and possibly legislate on – ways to prevent leaving without an agreement. But MPs are still seeking ways to tie the hands of a Eurosceptic prime minister.

Next week’s “estimates” vote on Tuesday is on the budgets for education, international aid, work and pensions, and housing. If the Grieve-Beckett amendment is passed the departments would not be able to receive funding unless the Commons has either ratified a Brexit deal or consented to leaving without one. – Copyright The Financial Times Limited 2019