Robert Mueller to testify before US Congress on investigation findings

May 29th, 2019: US special counsel Robert Mueller clarifies why his office chose not to charge US president Donald Trump with a crime following his investigation into interference in the 2016 presidential election. Video: C-Span 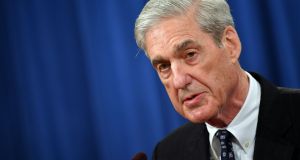 The US president Donald Trump hit out at Robert Mueller on Wednesday, hours after House Democrats announced that the Special Counsel would testify before Congress on July 17th.

In an interview with Fox Business, Mr Trump falsely accused Mr Mueller of destroying thousands of texts between two former FBI officials, Peter Strzok and Lisa Page, who worked on the Russia investigation.

The two officials, who were having an extra-marital affair, were found to have exchanged anti-Trump text messages. The Justice Department has previously found that 19,000 text messages between the two had disappeared due to technical problems, though there is no suggestion of involvement by Mr Mueller.

“That’s a crime,” Mr Trump said as he made the allegation in an interview. He also chastised Democrats for continuing to pursue investigations of him. “It never ends,” he said.

The chairs of the House Judiciary and Intelligence committees announced late on Tuesday, that Mr Mueller would testify on July 17th.

The public testimony will be only the second time Mr Mueller has commented publicly on the investigation since he was appointed Special Counsel in May 2017 after Mr Trump fired FBI director James Comey.

Last month Mr Mueller made a public statement on the conclusion of the investigation at the Department of Justice, stating that he would not be making any further comment.

But congressional committees have issued subpoenas, compelling Mr Mueller to testify to Congress.

“Americans have demanded to hear directly from the special counsel so they can understand what he and his team examined, uncovered, and determined about Russia’s attack on our democracy, the Trump campaign’s acceptance and use of that help, and President Trump and his associates’ obstruction of the investigation into that attack,” House judiciary chairman Jerry Nadler and House Intelligence Committee chair Adam Schiff – both Democrats – said in a statement.

Mr Mueller’s testimony will be highly anticipated given that his investigation hung over the Trump presidency for almost two years. While his investigation found no evidence of collusion between the Trump campaign team and Russia, it was more ambiguous about obstruction of justice charges against the president.

In his May 29th statement at the Department of Justice, Mr Mueller defended his decision not to adjudicate on whether Mr Trump obstructed justice, arguing that justice department rules prevented him from doing so.

But Mr Mueller also pointedly asserted that he had not exonerated Mr Trump from wrongdoing. “If we had confidence that the president clearly did not commit a crime, we would have said that.” This comment was seized upon by Democrats who are continuing to pursue their own congressional enquiries into Mr Trump’s relationship with Russian individuals.