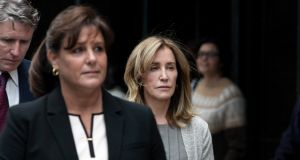 The picturesque town of New Haven was the location for the latest chapter in the bankruptcy trial of developer Sean Dunne this week.

But for most residents of the New England town, the goings-on in courtroom number three in the city’s commanding federal district court passed them by.

Unsurprisingly, it seems the fate of the so-called Baron of Ballsbridge may be of more interest to the readers of The Irish Times business pages than the residents of Connecticut.

Instead, New Haven was abuzz for another reason.

Earlier in the week thousands of people descended on the town for commencement week. The leafy New England community is home to Yale University, the third-oldest university in the country. As in many university towns, graduation ceremonies took place this week as the academic year came to an end.

In Ireland such occasions involve a short, formal ceremony, with mortar boards and scrolls adding a touch of grandeur – in the United States, graduation is an entirely more elaborate affair. Not confined to the ceremony itself, many graduations have morphed into commencement weeks and weekends, with their own ceremonies, traditions and high-profile speakers.

This year, the annual celebration of academic achievement garnered particular attention due to an atypical commencement address at Morehouse College in Atlanta.

Billionaire Robert Smith, the richest African-American in the country, was invited to deliver the commencement speech. But the soon-to-be graduates got more than they expected when Smith announced that he would pay off all the student loans of the class of 2019. The astonishing pledge made front-page news in the US, as well as plenty of column inches about how the promise would work in practice.

One student talked about experiencing “survivor’s guilt” when he thought about his classmates who had dropped out early in their course due to financial constraints. Others queried whether it was fair on families who had scrimped and saved to pay for their children’s education to see others have their loans written off.

But ultimately the benevolent gesture shed a light on the dysfunction of the American university system and the prohibitive cost of attending college in the United States.

A four-year stint at a private university, such as Ivy League institutions like Harvard, Stanford and Yale, can cost more than a quarter of a million dollars, including living expenses, according to some estimates. Tuition, fees and accommodation at Harvard cost more than $60,000 annually, for example.

State universities are cheaper, but still cost tens of thousands of dollars a year.

The average graduate with an undergraduate degree leaves college with a debt of $30,000. Overall, Americans collectively have about $1.57 trillion in college debt outstanding, and the rate of default is rising.

With college-educated young people likely to have higher earning power, the knock-on effect on social mobility is significant. The American Dream, it seems, has limits when it comes to third-level education.

Concerns about the growing elitism of higher education have been compounded by a recent college bribery scandal.

A total of 33 parents, nine college coaches and others have been charged in connection with the scandal which saw wealthy individuals retain “admissions consultant” William Singer to secure college places for their children, often by creating fake athletic profiles.

Actor Felicity Huffman, famed for her role in Desperate Housewives, is among those charged. She pleaded guilty this week to paying someone to secretly correct her daughter’s answers on her SAT exam, the standardised test used for college admissions.

A tearful Huffman told the court that her daughter knew nothing about the scheme. She was released on bail but could face prison when sentenced in September.

While the scandal has gripped America, it has thrown up important questions about the college admissions system. Yale is itself embroiled in the scandal, amid allegations that one student’s family paid $1.2 million in bribes to secure her admission.

As New Haven celebrated the achievements of the class of 2019 this week, serious questions remained. Ultimately, universities like Yale owe it to their students to ensure that graduating with a degree is reflective of hard work and academic ability – not the result of financial means, legal or otherwise.