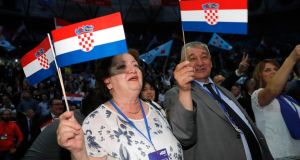 German chancellor Angela Merkel and Manfred Weber, her compatriot and leader of the European People’s Party (EPP), rejected nationalism and advocated inclusiveness at a rally in Croatia before this weekend’s European elections.

But the music played by their hosts struck a very different note.

Leaders of the Croatian Democratic Union clapped along to a song written by Marko Perkovic, whose homages to “greater Croatia” are beloved of the country’s far right; his band Thompson, named after the US submachine gun, has been banned from performing in Berlin and several other European cities.

The contrast exposed a tension felt across central and eastern Europe in these elections, as mostly moderate, liberal blocs in the European Parliament face the dilemma of whether to confront or compromise with populist parties in their ranks.

“Chancellor Merkel was not familiar with what songs would be played during the party gathering in Zagreb, nor did she know of the content of those songs,” her office said amid embarrassment over the mixed messages sent out in Croatia.

“During her visit to Zagreb, Chancellor Merkel clearly expressed her stance in opposing nationalism.”

The EPP and Fidesz

Weber, the EPP’s candidate to lead the European Commission, has long been accused of naivete or cynicism for striving to keep Hungary’s increasingly nationalist Fidesz party inside the EPP alongside the likes of Fine Gael.

The EPP did not tackle Fidesz, even as its leader Viktor Orban set about turning Hungary into an “illiberal democracy”, and the EU launched legal action against his government for cracking down on migrants and NGOs and forcing the liberal Central European University to move most courses from Budapest to Vienna.

When Hungary’s demonisation of the EU and EPP elder statesman Jean-Claude Juncker finally prompted the party to act in March, it chose to suspend – rather than expel – Fidesz, which allowed Orban to hail a victorious compromise and the EPP to avoid a split ahead of the elections.

Orban was anything but chastened, however, and subsequently denounced Weber’s bid to become commission president and gave a warm welcome in Budapest to Italian interior minister Matteo Salvini, the far-right firebrand who wants Fidesz to join his nascent European coalition of nationalist parties.

“I want the EPP to win the European elections. But afterwards we will have a painful debate about the way forward,” Orban told Germany’s Bild newspaper on Friday, ahead of voting in Hungary that Fidesz is set to dominate.

“I don’t want the EPP to tie its political fate to the left. In Europe today the political left stands for ideas which will destroy Europe – including Germany, ” he added.

“Instead of stopping migration, they want to facilitate it... In Italy Salvini is doing a good job, so we cannot rule out any alliance after the elections.”

Another EPP member is Bulgaria’s ruling Gerb party, which is neck-and-neck in polls with the opposition Socialists amid accusations of corrupt property deals against officials close to prime minister Boiko Borisov, who was due to join Weber, Merkel and Plenkovic in Munich on Friday for a final election rally.

It is not only the EPP that faces questions about its members’ behaviour, however.

Thousands of Czechs have rallied in Prague in recent weeks to demand a full investigation into fraud allegations against billionaire premier Andrej Babis, leader of the Ano party that belongs to the centrist Alliance of Liberals and Democrats for Europe group.

Alongside European elections on Sunday, Romanians will vote in a non-binding referendum on government efforts to tighten political control over the courts and weaken anti-graft legislation, which have prompted Brussels to threaten legal action.

The changes would benefit powerful figures including Liviu Dragnea, leader of the ruling Social Democrats (PSD), whose membership of the European Socialists group was frozen last month.

“Politicians are trying to get rid of the pressure they feel in this fight against corruption,” Frans Timmermans – European Commission vice-president and leader of the Socialists – said of Romania.

The Socialists chose not to expel the PSD, however, amid their fight with the EPP for control of the European Parliament, and between Timmermans and Weber for leadership of the European Commission.