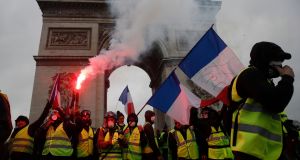 Yellow-vest (gilets jaunes) protestors at the Arc de Triomphe in Paris during a demonstration over high fuel prices in December, 2018. Photograph: Yoan Valat/EPA

A poll published on Friday by Ipsos/Sopra Steria showed Le Pen’s RN in the lead with 24.5 per cent of the vote, compared to 23 per cent for LREM. The conservative Les Républicains trail in third place, at 13 per cent.

In other polls this week, the RN scored up to three points higher than LREM. The gap is widening in favour of Le Pen’s party.

Macron joined the campaign late. “I cannot be a spectator, but must be an actor in the most important European election since 1979,” he told regional newspapers this week. “The Union is facing an existential risk.”

Macron’s attempt to dramatise the danger of nationalist populist leaders like Viktor Orban in Hungary and Matteo Salvini in Italy appears to have fallen flat.

It would be a huge, symbolic blow to Macron to place second. He has made a European renaissance his top priority.

When the RN, then called the Front National, won the last EU elections in 2014, Macron was an adviser at the Élysée. His party did not exist.

French voters must choose among 34 lists, of whom 11 stand a chance of reaching the 5 per cent required to send an MEP to Strasbourg. The lacklustre campaign has centred on the rematch between Macron and Le Pen, who faced off in the presidential election two years ago.

The first results will come in at 7pm Dublin time on Sunday. If the RN leads, Le Pen will continue to claim that it is “France’s first party”. She will have a stronger hand in negotiations with other nationalist parties in Strasbourg. Her friendships with like-minded leaders such as Heinz-Christian Strache, the Austrian vice-chancellor who was recently forced to resign over links to Russia, were criticised during the campaign.

Le Pen has never hidden her close ties to Vladimir Putin’s Russia. A Russian bank lent her €9 million for her last EU election campaign, and she has travelled repeatedly to Moscow.

“I am a French, and therefore a European, patriot,” Macron said this week. “I see ... complicity between the nationalists and foreign interests, whose objective is to dismantle Europe. Lobbyists like Mr [Steve] Bannon, who is close to the US government, say so. The Russians and others have never been so intrusive in financing extreme parties.”

Le Pen invited US president Donald Trump’s former adviser Bannon, who is seen as Trump’s Trojan horse in Europe, to the RN’s party congress last year. He spent last weekend in a €8,000-a-night suite in the Hotel Bristol in Paris.

At an appearance with Tomio Okamura, the head of the extreme right-wing Czech party SPD, last month, Le Pen was asked about Okamura’s goal of banning Islam in the Czech Republic. She said her friends were free to do as they pleased in their own countries.

Le Pen angered Manon Aubry, the head of the far-left France Insoumise (France Unbowed) list, by saying her party should be called “France Islamiste” because of its pro-immigrant policies.

The far right and far left portray Sunday’s vote as a referendum on Macron. “Vote against Macron,” the RN’s tracts say. “He mustn’t come in first or he will abuse it to methodically deconstruct France,” Le Pen said at a rally in Burgundy on Tuesday night.

Le Pen was to attend the RN’s last pre-election rally in the party’s stronghold at Hénin-Beaumont, northern France, on Friday night. She campaigned hard in the countryside, avoiding the big cities which support Macron.

Macron decided not to attend LREM’s last rally in Paris on Friday night. Advisers said he alone could mobilise the party, but at the same time they feared negative repercussions if he was too closely identified with defeat.

The president opted instead for a live question-and-answer session with young voters, on YouTube and Facebook. The session was moderated by the YouTube journalist Hugo Travers, who has 350,000 Facebook followers, three-quarters of them under the age of 30.

Polls show that 70 per cent of French 18-to 34-year-olds will not vote on Sunday. Abstention will be the biggest winner, with only 43 per cent of the electorate saying they are sure to vote.

The French have spent six months demanding greater democracy in yellow-vest demonstrations, Libération’s editor Laurent Joffrin pointed out. Now they have the opportunity to choose European representatives directly in a single-round, proportional election, but they won’t go to polling stations.