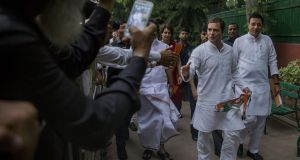 Rahul Gandhi, president of the Congress Party: calls for him to step down have intensified among demoralised party workers. Photograph: Pursuance Vishwanathan/Bloomberg

The 134-year-old party that has dominated Indian politics since independence in 1947 secured just 52 seats in the 543-member Lok Sabha (elected lower house of parliament), or one-sixth of the 303 seats the BJP won, according to election results released on Friday.

The BJP is the first party to secure a back-to-back majority in parliament since 1984. In India, 272 seats are needed to form the government.

The Hindu nationalists won 21 more seats than the 282 they secured in the 2014 general elections, registering a record 47 per cent vote share that was 16 per cent higher than what they obtained five years ago.

The Congress Party, on the other hand, won just 52 seats, eight more than its tally of 44 in 2014, rendering it ineligible to even stake its claim as the official opposition in parliament, as it failed to win 10 per cent of seats in the house. Its vote share was just 19.5 per cent.

The clamour for Congress Party leader Rahul Gandhi – a scion of the Nehru-Gandhi family that has dominated the party since its founding – to step down has intensified among demoralised party workers.

Gandhi’s ignominy was reinforced after he lost his family seat of Amethi, 650km southeast of New Delhi, to a BJP rival; but he will continue as MP after winning from a “safe” seat in southern India by an impressive margin against a little-known competitor.

At a hastily convened press conference on Thursday, Gandhi took responsibility for the political debacle, but deflected questions on his possible resignation as Congress Party head.

“The Congress must die,” tweeted political analyst Yogendra Yadav, adding that if it could not stop the BJP in this election, it had no positive role left to play. The Congress leadership represented the single biggest obstacle to creating an alternative, said Yadav.

Rahul’s great-great-grandfather Motilal Nehru founded the Congress Party and his son Jawaharlal was India’s first prime minister for 17 years after independence. He was succeeded, after a brief hiatus, by his daughter Indira Gandhi, who was assassinated in 1984. Rahul’s father Rajiv became PM until late 1989 and then, in the mid-1990s, Rajiv’s widow Sonia became Congress Party chief before handing over its leadership to Rahul in December 2017.

Indian television news channels on Friday reported that Gandhi was expected to offer his resignation to the Congress working committee when it meets on Saturday to consider the electoral outcome.

But party insiders and analysts claimed it would be a “token offer” by Gandhi to step down and, like in the past, the offer would be rejected by the party amid much fanfare.

“The Congress Party cannot survive without its dynastic leadership but, as the elections have shown, it also cannot prosper with it,” said Seema Mustafa of the Centre for Policy Analysis in New Delhi. This, however, is the time for the dynasts to step back and let the party reinvent itself, she added.

The BJP decisively outmanoeuvred the Congress Party in the elections through its presidential-style campaign centred round Modi, who skilfully combined his party’s long-standing Hindutva or Hindu hegemony agenda with nationalism and a strong national security policy.

The entire performance was backed by a slick and aggressive social media crusade that the Congress Party was simply unable to match.