British prime minister Theresa May has announced that she will leave her office, three years after succeeding David Cameron. 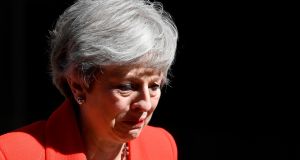 Theresa May at the end of her address at Downing Street. She said she was standing down as Conservative leader “with no ill-will, but with enormous and enduring gratitude to have had the opportunity to serve the country I love.” Photograph: Toby Melville/Reuters

Theresa May’s resignation statement will be remembered for the distress she showed at the end of it, a rare display of raw feeling from this most reserved of politicians. Her voice began to tremble as she said she would soon be leaving the job it had been “the honour of my life to hold”. She seemed to recover with a quick smile as she spoke about being Britain’s second female prime minister but a few seconds later as she summed up her feelings about resigning, she could no longer hold back her tears.

“I do so with no ill-will, but with enormous and enduring gratitude to have had the opportunity to serve the country I love,” she said.

If May truly has no ill-will against the men who drove her from office, she is a woman of heroic forbearance. But at the heart of her statement this morning was a message for her successor that there is no alternative to seeking a consensus at Westminster over Brexit.

“Such a consensus can only be reached if those on all sides of the debate are willing to compromise,” she said.

Her warning might carry more authority if she had not shied away from the path of compromise on Brexit for so long. Elected Conservative leader by acclamation in 2016 after Andrea Leadsom withdrew from the contest, May could have pursued a form of Brexit that reflected the narrow margin of victory in the referendum.

Instead, she told her party conference in October that year that she would trigger article 50 within six months and laid down the red lines that have haunted the negotiations ever since. She restated them in her Lancaster House speech the following January, promising that Britain would leave the single market, the customs union and the jurisdiction of the European Court of Justice.

She threw away her party’s Commons majority by calling an unnecessary general election in 2017, May had an opportunity to change course. But she persisted with a strategy of seeking a Brexit deal that could win a majority on the basis of Conservative and DUP votes alone.

By the time she started talking to Labour earlier this year it was too late, her own authority had been worn down to nothing and nobody at Westminster believed she could deliver any compromise that was agreed.

May spoke in her statement about the need for compromise in restoring the devolved institutions in Northern Ireland and she came to understand the danger Brexit posed to the constitutional settlement there. As a unionist, she feared that a no-deal Brexit would increase support for a Border poll that could eventually see Northern Ireland leave the United Kingdom. And the murder of Lyra McKee last month brought home to her the danger of a wider return to violence.

May’s successor will almost certainly seek to renegotiate the Northern Ireland backstop, probably promising to leave the EU without a deal on October 31st rather than accept the withdrawal agreement as it stands. In her statement this morning, May said nothing about seeking further concessions from Brussels, pointing her successor towards where the solution to the Brexit impasse lies, at Westminster.