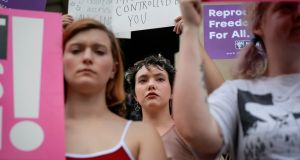 Ireland may have made history last year by legalising abortion, but in the United States the debate is far from over.

More than 45 years after the Roe v Wade ruling – the landmark supreme court judgment that legalised abortion in the United States – the issue remains as contentious as ever.

Donald Trump’s ascent to the presidency, and his nomination of two supreme court justices, was welcomed by conservatives across the land. Indeed Trump’s promise to appoint conservative justices was one of the main reasons many evangelical Christians voted for him, despite their reservations about the thrice-married billionaire.

Their bet paid off. While some presidents never get the opportunity to nominate a justice to the court’s highest land, the vacant seat left by Antonin Scalia’s death, and Justice Anthony Kennedy’s decision to stand down last year, gave Trump the opportunity to leave his mark on the US judicial system long after he leaves office.

The nomination of Brett Kavanaugh was particularly significant given that he replaced Kennedy, traditionally a swing vote, therefore tilting the court to the right.

The fears of pro-choice activists of a steady erosion of abortion rights, which could ultimately lead to the supreme court overturning Roe v Wade, have been borne out in recent months. Across the US individual states have moved to introduce strict abortion laws.

Even after Roe v Wade, individual states continued to hold significant powers over abortion, resulting in widely different standards of provision across America.

Missouri, for example, has just one abortion clinic, with the result that many women have to travel to neighbouring states for the procedure. For decades, some states – particularly when Republicans control the state legislatures – have sought to curtail access to abortion, for example by introducing waiting periods for women or demanding the involvement of a second physician.

The supreme court has weighed in in some instances. For example, in 2016, the court found that a Texan law obliging abortion clinics to have doctors with hospital-admitting privileges placed an “undue burden” on abortion access.

But in more recent times there has been a more direct attempt to change the law.

This week Georgia became the latest state to introduce a so-called heartbeat Bill. This is a law banning abortions after six weeks – a point in the pregnancy when many women may not know they are pregnant. It follows similar Bills in states such as Ohio, Iowa and North Dakota, though New York liberalised its laws this year, allowing for abortions over 24 weeks in some cases.

Next week, Alabama’s senate will vote on a controversial Bill that would introduce the most draconian abortion regime in the United States. The vote had been scheduled for Thursday but was abandoned following uproar in the chamber.

In addition to banning all abortions except in certain cases, doctors who perform terminations could be charged with a felony and face up to 99 years in prison unless a woman’s health is at serious risk.

The Republican lawmaker who sponsored the Bill, Terri Collins, has been upfront about its aim.

She hopes that the new law may eventually be taken up by the supreme court, which could then lead to the 1973 Roe v Wade judgment being overturned.

As the fight over abortion provision intensifies, the issue is likely to feature in next year’s presidential election, with both parties hoping that the divisive subject may help motivate voters.

Kirsten Gillibrand went further than most prospective Democratic nominees by pledging this week to only nominate supreme court judges who would uphold Roe v Wade.

Joe Biden’s changing views on abortion could also be problematic for him during the campaign. In his early years in the Senate, he backed a Bill that would have given states the right to overturn the supreme court judgment.

As for Donald Trump, the president is likely to highlight the issue on the campaign trail.

Trump – who in 1999 described himself as “very pro-choice” – has pleased many of his supporters and anti-abortion conservatives in Congress with his stance on abortion since winning the White House.

Like previous Republican presidents, he designated a “National Sanctity of Human Life Day”. He also became the first president to address the annual March for Life in Washington, a prominent anti-abortion rally. Vice-president Mike Pence praised him as “the most pro-life president in American history”.

As Trump prepares for a tough campaign battle, he will be hoping that Pence’s words of praise may help to secure the support of Republican voters for a second time.