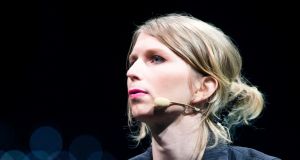 Former US soldier Chelsea Manning was sentenced by a military judge in 2013 to 35 years in prison. File photograph: Lars Hagberg / AFP/Getty Images

Former US army intelligence analyst Chelsea Manning has been released from jail after a two-month stay for refusing to testify to a grand jury.

Ms Manning spent 62 days at the Alexandria Detention Centre in Virginia on civil contempt charges after she refused to answer questions to a federal grand jury investigating WikiLeaks.

Her lawyers fear her freedom may be short-lived as she was released owing to the term of the grand jury expiring.

She received another subpoena demanding her testimony on May 16th to a new grand jury before leaving jail.

Her lawyers say she will again refuse to answer questions and could again face another term of incarceration.

Ms Manning served seven years in a military prison for leaking a trove of documents to WikiLeaks before then US president Barack Obama commuted the remainder of her 35-year sentence.

Earlier this week, Ms Manning’s lawyers filed court papers arguing that she should not be jailed for civil contempt because she has proven that she will stick to her principles and will not testify no matter how long she is jailed.

Federal law only allows a recalcitrant witness to be jailed on civil contempt if there is a chance that the incarceration will coerce the witness into testifying.

If a judge were to determine that incarcerating Ms Manning were punitive rather than coercive, she would not be jailed.

“At this point, given the sacrifices she has already made, her strong principles, her strong and growing support community, and the disgrace attendant to her capitulation, it is inconceivable that Chelsea Manning will ever change her mind about her refusal to cooperate with the grand jury,” her lawyers wrote.

Ms Manning filed an eight-page statement with the court on Monday outlining her resolve.

She wrote that “cooperation with this grand jury is simply not an option. Doing so would mean throwing away all of my principles, accomplishments, sacrifices, and erase decades of my reputation — an obvious impossibility,” she wrote.

She also said she was suffering disproportionately in jail because of physical problems related with inadequate follow-up care to gender-reassignment surgery. – AP