London Letter: Amid scepticism over inter-party talks there is fresh attention on the backstop 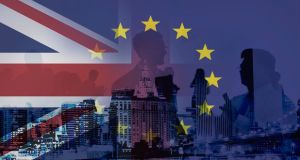 Few at Westminster expect the bilateral talks to produce a common position on Brexit, so the government can only pass the Bill by persuading most Conservatives and a substantial number of Labour MPs to support it.

Talks between the British government and the Labour Party have fallen into a familiar pattern, with each meeting followed by a moderately optimistic Conservative statement and a gloomier verdict from Labour. But the two sides have until now agreed after every meeting that the negotiations are worth continuing and they will resume on Monday for what is likely to be their last week.

The following week, days before the European Parliament elections on May 23rd, the government hopes to introduce the Withdrawal Agreement Bill (WAB). If the talks with Labour produce a common position, that will be reflected in the text of the Bill, which both parties would support.

Few at Westminster expect the talks to produce a common position on Brexit, however, so the government can only pass the Bill by persuading most Conservatives and a substantial number of Labour MPs to support it. Even if the talks with Labour fail to produce an agreed position, the two sides could agree a deal on a process that would at least allow the Bill to pass its second reading.

Conservative MPs who are sceptical about the talks with Labour point out that although Theresa May’s deal was rejected three times and MPs voted down every alternative offered in indicative votes, one Brexit proposal has won a majority in the House of Commons. That is Graham Brady’s amendment endorsing the withdrawal agreement on condition that the Northern Ireland backstop is “replaced with alternative arrangements to avoid a hard border”.

The European Union has made clear that the backstop is an essential part of the withdrawal agreement, which cannot be reopened. When they agreed last month to extend Britain’s membership until October 31st, EU leaders warned London that “any unilateral commitment, statement or other act should be compatible with the letter and the spirit of the withdrawal agreement and must not hamper its implementation”.

Many Conservatives believe nonetheless that the key to ratifying the withdrawal agreement lies in alternatives to the backstop and some are backing an initiative to find them. The Alternative Arrangements Commission, run by a pro-Brexit think tank but led by former Conservative ministers Greg Hands and Nicky Morgan, this week appointed a panel of 20 experts to advise on alternative ways to keep the Border open.

The commission, which will report next month, says it will work “within the parameters of the withdrawal agreement, to seek solutions that are both realistic and sustainable while continuing to protect the Good Friday [Belfast] Agreement”.

Dublin is sceptical about the group, not least because many of its experts have endorsed earlier proposals to replace the backstop that the EU dismissed as fanciful or unworkable. These include customs experts Hans Maessen and Lars Karlsson, pro-Brexit trade lawyer Shanker Singham, and Graham Gudgin, a former economic adviser to David Trimble.

The backstop cannot be removed from the withdrawal agreement, but as David Lidington pointed out after a meeting with Simon Coveney in London this week, the agreement allows for alternative arrangements to ensure it is never triggered.

“Those are mentioned in terms in both the withdrawal agreement and the political declaration, and the European Commission and the United Kingdom have committed themselves to early work on alternative arrangements. And the agreement the PM negotiated with [European Commission] president [Jean Claude] Juncker in Strasbourg committed the European Union and ourselves to using best endeavours to bring such work to a successful conclusion by the end of 2020,” he said.

Coveney agreed, saying that if alternative arrangements “do the same job as the backstop, they can replace it” but that none had so far been proven to do so comprehensively. The problem for those at Westminster pinning their hopes on alternative arrangements is that, although the EU is open to exploring them after the withdrawal agreement is ratified, it insists that the backstop must remain in the agreement as an insurance policy.

“We can’t sign up to that uncertainty because it will dominate politics in Northern Ireland and in the Republic of Ireland if we do that for the foreseeable future.”