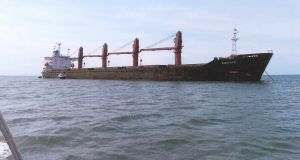 The US seized a North Korean ship which was carrying coal that violated United Nations sanctions, the justice department announced on Thursday. The move – the first time the US has seized a vessel from North Korea – comes at a time of renewed tensions between the two countries following missile launches by Pyongyang over the last week.

The ship, the second-largest in the country’s fleet, was carrying coal out of the country and importing machinery, in violation of sanctions. It was in US custody and making its way towards American Samoa on Thursday, the US department of justice said.

Asked about the development, US president Donald Trump said that the relationship between the two countries “continues, but we’ll see what happens”.

“They’re talking about negotiating, but I don’t think they’re ready to negotiate,” he said of North Korea.

Asked about the latest missile launches he said: “We’re looking at it very seriously right now . . . Nobody’s happy about it.”

Mr Trump used an extended questions-and-answers session in the White House at the launch of a new healthcare proposal, to talk at length about the Mueller report.

He attacked Mr Mueller, the special counsel and former FBI director who led a 22-month investigation into Russian interference in the 2016 presidential election, as “somebody that is in love with James Comey”. Mr Trump was speaking two years to the day since he fired the then FBI director. He said the Mueller investigation was conducted by “angry Democrats who hated Donald Trump”, though he described the final 448-page report as “beautiful”.

The report had found no collusion and “essentially” no obstruction, he said.

However, he appeared to backtrack on his suggestion over the weekend that he would prevent Mr Mueller – who is still an employee of the justice department – from testifying before Congress, instead saying it was a matter for the attorney general, William Barr.

Mr Trump was also asked about the revelation that the Senate intelligence committee – which is controlled by Republicans – had subpoenaed his son, Donald jnr, to testify. He said he was “very surprised” at the request.

“My son’s a very good person, works very hard,” he said, adding that he had testified before the special counsel for “hours and hours” and had been “totally exonerated by Mueller”.

Earlier in the day, House speaker Nancy Pelosi said she agreed with judiciary committee chairman Jerry Nadler that the US was now in a constitutional crisis over the White House’s refusal to comply with subpoena requests from Congress.

“Yes, I do agree with chairman Nadler,” she said during a press conference in the US Capitol, “because the administration has decided that they’re not going to honuor their oath of office”.

But she sounded a note of caution about beginning impeachment proceedings against the president.

“Impeachment is one of the most divisive things that you can do, dividing a country,” she said. “Unless you really have your case with great clarity for the American people.”