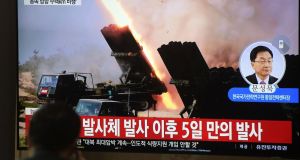 The South Korean joint chiefs of staff said the projectiles were believed to be short-range ballistic missiles, and were fired at about 4.30pm from near the western city of Kusong, North Pyongan province. The projectiles flew 420km and 270km and landed in the East Sea.

The move comes after Kim Jong-un, North Korea’s leader, on Saturday oversaw a series of weapons launches, including what defence analysts said was the country’s first short-range ballistic missile tested since August 2017.

The launches cast further uncertainty over negotiations between Mr Kim and Donald Trump, US president, towards denuclearisation after more than a year of detente.

Mr Kim is seeking a step-by-step deal where tough economic sanctions are lifted for each phase of denuclearisation. The US has insisted that sanctions should not be lifted unless Pyongyang destroys its entire nuclear programme.

But talks have stalled after Mr Trump and Mr Kim failed to reach an agreement at a summit in Hanoi in February.

In the wake of Saturday’s tests, Washington appeared to downplay the events. Mr Trump maintained he would reach a deal with Mr Kim on denuclearisation and Mike Pompeo, the US secretary of state, said the US intended to continue negotiations.

Moon Jae-in, South Korea president, said Pyongyang appeared to want to continue negotiations, noting that the tests run this week had not threatened the US and South Korea.

“But I’d like to warn that if North Korea repeats this kind of act, it will make dialogue and negotiations difficult,” Mr Moon said in a televised interview on Thursday evening.

He also reiterated his view that providing food aid to North Korea could help “open the door” for denuclearisation talks.

However, experts expect an increase in the frequency of missile launches from North Korea as Pyongyang pushes the US to change its position.

Andrei Lankov, a North Korea expert at Kookmin University, said tests would probably continue “for months to come” as Mr Kim returned to a strategy of “creating a crisis” to win concessions.

“[North Korea] is saying ‘we are here, we are highly dangerous, we are completely unpredictable and it is better for you, the Americans, to sit down and work out some compromise’,” he said.

Van Jackson, a former Pentagon official and now a lecturer at Victoria University of Wellington, said that while Mr Kim believed he was operating “from a position of strength”, he still needed relief from sanctions.

“These tests will continue, and gradually escalate, until the US capitulates to Kim’s demands,” Mr Jackson said.

Jina Kim, an analyst at the Korea Institute for Defense Analyses, said North Korea was “testing the water” to see the limits of US tolerance, and noted that Mr Kim believed “neither China nor Russia would harshly criticise these moves”.

Analysts also said North Korea would probably stop short of breaking a self-imposed moratorium on testing long-range missiles that the US considered threatening.

South Korean defence officials initially said the projectiles were launched from Sino-ri but the launch location was later revised to Kusong, also in the country’s west.

According to the Center for Strategic and International Studies, a Washington-based think tank, North Korea test-fired a medium-range missile in February 2017 from a location near Kusong. – Copyright The Financial Times Limited 2019