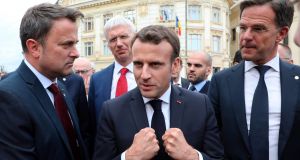 EU leaders on Thursday put action on climate change at the top of the union’s agenda for the next five years. Meeting in Sibiu, Romania, leaders gave strong support to an initiative by nine of their number to emphasise the issue in political and financial terms in the union’s five-year “strategic agenda” to  be approved by the June EU summit.

The move was supported by Taoiseach Leo Varadkar. “It’s an absolute priority that we leave our planet to the next generation in a condition that we inherited it, and climate change is a threat to life on this planet,” he said. “So we put it right up there with jobs and the economy, with migration and security challenges. We’re very much part of that group of people that wants us to intensify climate action.”

He said that Ireland had not been able to sign the letter from the nine because “we’ve a difficulty signing up to more onerous targets for 2030. We don’t have a difficulty with the aim of carbon neutrality by 2050 . . . notwithstanding the recent figures that showed that our CO2 emissions are falling by about 7 per cent a year, we still think it’s going to be very difficult to meet the existing targets.

“We couldn’t in good faith sign up to more onerous targets until we actually know that we can achieve them.”

The meeting also launched a preliminary discussion on the filling of EU top jobs. In order to forestall attempts by MEPs to bounce them into automatically accepting the European Parliament’s nomination for the next EU Commission president, the leaders agreed to meet within two days of the parliamentary elections on May 28th to review their options.

EU Council president Donald Tusk told journalists that his overwhelming sense of the meeting was of a determination by leaders to take full responsibility for the future of the union. He intends, he says, to respect that spirit by pressing ahead urgently to start the nomination process for the EU’s top jobs – “swiftly, smoothly, and effectively”.

The leaders are legally free to pick their own nominee, but parliament is threatening to vote down anyone not put before voters in the “spitzenkandidat” system – under which the candidate from the party with the largest vote is nominated as MEPs’ choice for commission president.

The list of potential candidates for all the EU top jobs has been growing by the day and most of those mentioned for the commission, like chief Brexit negotiator Michel Barnier, will not have democratic mandates.

Two international issues intruded on the agenda – the threat by Iran to pull out of parts of the 2015 nuclear deal, which has already been repudiated by the US; and Turkish plans for offshore drilling operations in an area claimed by Cyprus as its exclusive economic zone, which have been condemned in recent days by the EU and US and are adding to tensions between Ankara and its western allies.

Turkey and the Greek Cypriot government have overlapping claims of jurisdiction for offshore oil and gas research in the eastern Mediterranean, a region thought to be rich in natural gas. EU leaders expressed their strong defence of Cypriot sovereignty.

“The EU stands united behind the Republic of Cyprus,” Mr Tusk said, “and expects Turkey to respect sovereign rights of EU member states.”

The meeting reaffirmed its commitment to the Iran nuclear deal. “We remain fully committed to the full implementation of the JCPOA [Joint Comprehensive Plan of Action], of the nuclear deal. It’s a matter of security for us and for the entire world,” EU foreign policy chief Federica Mogherini told reporters.

At a pre-summit dinner in The Hague on Wednesday night, Mr Varadkar and Dutch PM Mark Rutte also had a wide-ranging discussion on all of the main challenges facing the EU. The Taoiseach then, on Thursday morning, hitched a lift on the Dutch government jet to Sibiu.

Their meeting will help to consolidate an informal alliance known unofficially as the Hanseatic League, with which Ireland has become linked, an important part of its new diplomatic outreach post-Brexit. The “Hansa” brings together eight Nordic and northern European small states which share a broadly conservative fiscal outlook.

Among the issues Mr Varadkar emphasised to journalists after their meeting were corporate tax and climate change. “Both countries strongly believe that tax is a sovereign issue,” the Taoiseach said, but they both recognise that “we can’t have a world in which large, very wealthy companies avoid paying tax anywhere”.

He said that both men welcomed the progress being made by the OECD in preparing proposals on this issue.

The UK’s Brexit minister, Stephen Barclay, speaking at a fringe meeting in Sibiu, accused Europe’s politicians of “lazy thinking”, saying the EU should see Britain’s departure as an opportunity to build a new relationship rather than as “something to be punished”.

British PM Theresa May had not been invited to the informal summit, which was focusing on the EU’s post-Brexit future, but Mr Barclay showed up to fly the flag. He spoke of his “frustration with the narrative in Europe on Brexit”. He said that the referendum had been a vote for “confidence, optimism, a desire to be more global”.