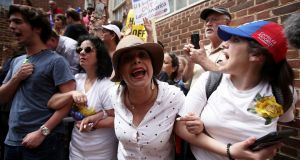 It is more than two weeks since Matthew Burwick Orta began sitting on the steps of the Venezuelan embassy in Washington. The 51-year-old former photographer who moved to North Carolina from Venezuela two years ago was soon joined by dozens of his compatriots, many of whom are now staying in makeshift tents around the embassy.

“This is my embassy. This is my country,” he says quietly as he points at the redbrick building, struggling to be heard amid the shouting taking place all around him.

Located in the leafy neighbourhood of Georgetown, the Venezuelan embassy has become the site of political protest in recent weeks, transforming the usually tranquil streets into a focal point of civic unrest.

Dozens of secret service and federal agents surround the barricaded building as harried locals try to navigate their way into nearby apartment buildings.

Just beyond the barricades, two rival groups are shouting at each other and swapping insults, holding signs and forming human chains as the security services keep a watchful eye. Some sing the Venezuelan national anthem.

The drama began late last month when a pacifist group called Code Pink occupied the building. Diplomatic staff representing the government of Nicolás Maduro had left the embassy in mid-April. Protesters belonging to Code Pink and Popular Resistance, an anti-war group, say they were invited in by the departing staff. There they have remained, hanging banners and demonstrating through megaphones from inside the building.

The group, which is protesting against the US government’s decision to recognise opposition leader Juan Guaidó as the leader of the South American country, attracted the attention of local Venezuelan residents, most of whom want Maduro gone. They have now set up their own counter-protest outside the building, in some cases blocking those inside from receiving food and medical supplies.

Dressed in the group’s signature pink outfits, Medea Benjamin, the co-founder of Code Pink, tells me that her organisation’s main aim is to prevent another senseless US intervention abroad, arguing that Guaidó is not Venezuela’s leader.

“We don’t want the embassy to be taken over by an unelected government,” she says, referring to Guaidó’s representatives in the US amid reports that they may soon move into the building.

“We have a right to protest. These people are preventing food and medicines from getting into our people inside,” she adds as another shouting match erupts between her aides and a row of Venezuelan protesters.

But the Venezuelans who have gathered here disagree.

“They believe in non-intervention, but what do you call this?” says 26-year-old Daniella Bustillos. “A group of Americans trespassing, staying illegally in our embassy? This is US intervention. They’re assuming that we don’t know best for our country and our people.”

Matthew Burwick Orta agrees. “I was forced to leave my country. I am a journalist, photographer and you become a target. The police don’t work for the people. Maduro is a dictator.”

He says he has suggested to the Code Pink protesters that they should go to Venezuela and see the reality of life there. “It is a tragedy what is happening in Venezuela. I have experienced the reality of living in the country. Friends of mine, innocent people, are in jail. You couldn’t protest like this, for example, in my country,” he says.

As the standoff between the two groups continues, a tussle erupts as a Code Pink protester tries to get food into the embassy through the front door, prompting the security services to intervene and prevent her from accessing the building.

While the situation at the embassy has become a symbol for what is unfolding in Venezuela, it has also opened up tricky legal questions. As illustrated by WikiLeaks founder Julian Assange’s long stay in the Ecuadorian embassy in London, technically police cannot enter an embassy owned by a foreign government. But the unique political situation currently in Venezuela complicates things further, given that the US recognises the authority of Guaidó.

Publicly the state department has called on the protesters to leave the building, and the administration believes the Venezuelan government – led by Guaidó – ultimately has legal authority over the embassy in DC.

Many believe that a trigger point may come if the administration allows Guaidó’s representatives in the United States to enter the building. It is also unclear how long the two dozen or so protesters mainly residing in a conference room on the second floor can hold out as it becomes increasingly difficult to get food into the building.

In the meantime, both sides seem unlikely to cede ground. One young Venezuelan protester holding a sign reading “stop whitesplaining my country” says she is using all her annual leave to spend every day and night outside the embassy. “They don’t know anything about the situation in our country. We do. This is our embassy and we’re staying here.”