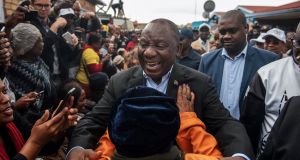 South African president Cyril Ramaphosa greets a voter as he arrives to cast his vote for the general elections at the Hitekani Primary School, Chiawelo, Soweto. Photograph: Michele Spatari/AFP/Getty Images

South Africa’s ruling African National Congress (ANC) party is on track to win the country’s general election, although its final tally for the national vote is in danger of being the worst result in its history.

With results declared in 57 per cent of districts by 6pm on Thursday evening, the former liberation movement had won 56.8 per cent of the ballots in the parliamentary vote. It was followed by its main rival, the Democratic Alliance (DA), which at that stage had 22.6 per cent of the count.

The ANC’s fall in popularity can be attributed to the allegations of corruption and incompetence that have dogged dozens of its members serving in former president Jacob Zuma’s government from 2009 to February 2018.

Indeed, many people believe that without current leader Cyril Ramaphosa at the helm – he was elected ANC leader in December 2017 – the party was facing an election meltdown that could have dipped its support to below 50 per cent.

The DA’s poor showing is primarily linked to internal factional battles that have led to a split in the movement in recent months.

In third place was Julius Malema’s Economic Freedom Fighters (EFF) on 9.7 per cent of the national vote, which means the radical left-wing party formed in 2013 is on course to grow its support by nearly 50 per cent from 6.35 per cent in the 2014 poll.

Based on a third of the ballots counted, the government’s Council for Scientific and Industrial Research projected an ANC victory with 57.3 per cent of the vote, followed by the DA on 21.5 per cent and the EFF with 9.7 per cent.

Ahead of Wednesday’s election it was predicted that the ANC would struggle to retain a majority in the Gauteng, North West and KwaZulu-Natal provincial elections.

However, as results came in to the Independent Electoral Commission’s headquarters in Pretoria on Thursday only Gauteng appeared in danger of slipping out of the ANC’s complete control.

By early evening the ANC had 52.8 per cent of the vote, the DA had 25.8 per cent and the EFF had 14.55 per cent. If the opposition parties can bring the ANC below 50 per cent then South Africa’s economic heartland will be run by some form of coalition for the next five years.

The DA appeared to be on course to retain control of the Western Cape province, which it has run since 2009.

The electoral commission confirmed it is investigating allegations of voter fraud after political parties raised concerns about the voting process in some districts. However, the body insisted the incidents being looked at will have no bearing on the final result.

Election officials have pegged the voter turnout at about 65 per cent of the 26.7 million people who registered to vote in Wednesday’s poll, a drop of nine percentage points on 2014’s turnout.

In total 48 political parties contested South Africa’s general election, the largest number to contest an election in the country since apartheid ended 25 years ago. The official result is expected on Saturday.