Charles Manson’s links to the Beach Boys, Guns N’ Roses and the Beatles 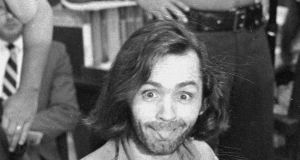 Charles Manson sticks his tongue out at photographers in June 1970 as he appears in a Santa Monica, California courtroom, charged with the slaying of musician Gary Hinman. Photograph: AP

Charles Manson, who died on Sunday at 83, has loomed large in American culture ever since a brutal killing spree by his gang of followers, called the Manson Family, claimed the lives of the actress Sharon Tate and eight others in the summer of 1969.

Manson once dreamed of stardom, and he assembled a drug-fuelled apocalyptic cult along the way. Like a 20th-century Jack the Ripper, his name evokes a legendary tale of violence that has inspired writers, filmmakers and others for decades. Here is a look at Manson’s ties to pop culture before the killing spree and the Manson Family’s endurance in the public imagination since.

Manson wanted to be a rock star, and one year before the killing spree the family briefly lived in the home of Dennis Wilson, the drummer for the Beach Boys. Manson hoped to parlay that friendship into a record deal, but their relationship soured and a music career never materialised.

Years after the murders, he did end up releasing two albums from prison, LIE and Live at San Quentin. Guns N’ Roses and Marilyn Manson, whose stage name was in part inspired by Manson, recorded songs he wrote. The Beach Boys released a song based on one he wrote, too, but they gave it new lyrics and a new title, Never Learn Not to Love. Manson’s version had been called Cease to Exist.

Pop music was also the medium through which Manson believed he was being sent secret messages about an apocalyptic race war whose arrival could be hastened by murder. He was obsessed with the Beatles and believed that their White Album prophesied the war, which he called Helter Skelter after a Beatles song. One of his followers, Patricia Krenwinkel, scrawled a misspelled version of that phrase in blood at the home of Leno and Rosemary LaBianca after the “family” killed them.

Manson’s relationship with the entertainment industry and his obsession with fame were chronicled over 12 episodes of Karina Longworth’s Hollywood history podcast, You Must Remember This, in 2015. “Maybe more than anything else, Charlie Manson’s story is a Hollywood story,” she told her listeners.

Longworth said on her podcast that the killings could be seen “as the fulfilled revenge fantasy of one of the millions of pilgrims who have come to Hollywood looking to make their mark, only to be condescended and lied to and turned away with nothing to show for their efforts.”

That podcast is just a recent entry in the deep subgenre of true-crime work devoted to the Manson family. There have been a fleet of books and made-for-TV movies based on the killings, as well as an NBC series, Aquarius, starring David Duchovny. The family has also been portrayed in a 1990 Lincoln Center opera and a 2014 musical in Germany.

One of the first books about the Tate-LaBianca murders was The Family, a 1971 account of the events that led up to the killings, written by the poet and activist Ed Sanders. The most successful true-crime work based on the killings, though, may be Helter Skelter, a 1974 book about the family and their trial that was written by Curt Gentry and Vincent Bugliosi, the prosecutor who secured their convictions in the case. It sold more than seven million copies and inspired two made-for-TV movies, in 1976 and 2004.

Manson was not present when his followers committed their crimes, and much of the recent work on the group has focused on the gender dynamic of a charismatic male leader commanding a mostly female group of his followers to kill. Several women in the Manson family said they were in love with him. “It didn’t happen overnight,” Leslie Van Houten, a family member convicted of the LaBianca murders, told Diane Sawyer in a 1994 interview. “He spent a lot of time taking middle-class girls and remoulding them.”

Several works released in recent years explored the role of women in the killings and tried to understand what drew them to Manson. A film broadcast on the Lifetime network in 2016 summed up that fascination in its title: Manson’s Lost Girls.

Two fiction books also sought to explain the Manson women: American Girls, by Alison Umminger, and The Girls, which netted its 25-year-old author, Emma Cline, a $2 million advance. In an essay for The Paris Review, Cline said she empathised with “the Manson girls” who lived with their unhinged leader at a former movie set called Spahn Movie Ranch.

“It was something I could understand,” she wrote. “They had been welcomed at the ranch, given nicknames both childish and aspirational. They had been held tightly and told they were unlike anyone else. I was not so different. We all wanted to be chosen in some way. Maybe it’s just an accident which women are chosen by violence.”

In Their Own Words

Manson and his followers have also spoken for themselves. In addition to the 1994 interview with Sawyer, Manson published a memoir in 1987, Manson In His Own Words, with the help of Nuel Emmons, a former convict he knew from an earlier stint in prison.

Manson wrote in the book about his troubled youth. He was born to a single mother, abandoned at the age of 12 and then abused and raped at reform school. “It’s obvious there is something lacking in my makeup,” he said. He also reflected on his popular image as the face of evil. “I’m nothing but the reflection of evil that goes through the minds of all those people who created the monster and keep pushing the myth to kids who don’t know any better,” he wrote.

Krenwinkel, who is serving a life sentence, reflected on her relationship with Manson for the filmmaker Olivia Klaus in a New York Times Op-Doc, My Life After Manson, in 2014. She described it in romantic terms. “It all seemed so very simple in the beginning,” she said. “I can only tell you, I have been with something that started only as one woman with one man that turned into one of the most disastrous, most horrendous, most abominable situations that could possibly have come out of it.” –NYT