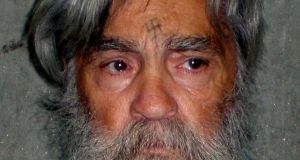 Convicted mass murderer Charles Manson in a 2011 picture from the California Department of Corrections and Rehabilitation. Photograph: Reuters

Convicted mass murderer Charles Manson was taken from a California prison, where he is serving a life term, to a hospital for an undisclosed medical issue on Tuesday, news media reported.

Manson, 82, was seriously ill, a source told the Los Angeles Times, but could not provide further information.

TMZ reported that Manson was transported to a hospital in Bakersfield, about an hour from California State Prison in Corcoran, where he was being held.

In the 1960s, Manson, a charismatic ex-convict, assembled a group of runaways and outcasts known as the Manson Family.

Manson’s followers stabbed or shot to death four other people at Tate’s home. The following night, Manson’s group entered the nearby home of grocery store chain owner Leno LaBianca and his wife, Rosemary, stabbed the couple to death and used their blood to write “Rise”, “Death to Pigs” and “Healter Skelter”, a misplaced reference to the Beatles song Helter Skelter, on the walls and refrigerator door.

Manson was originally sentenced to death but was spared execution and his sentence converted to life in prison after the California Supreme Court declared the death penalty unconstitutional in that state. Reuters