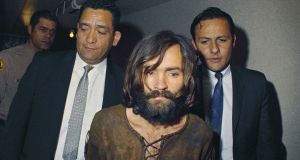 In this 1969 file photo, Charles Manson is escorted to his arraignment on conspiracy-murder charges in connection with the Sharon Tate murder case. Photograph: AP

His clutch of deranged disciples, known as the Manson Family, gained notoriety after committing a string of ritualistic murders in California in the late 1960s.

Their most high-profile victim was actress Sharon Tate — wife of director Roman Polanski — who was mercilessly gutted when almost nine months pregnant.

The octogenarian cult leader, who had a Swastika etched between his eyebrows, spent the past four decades in prison — barely making a dent in his nine life-sentences.

He was born Charles Milles Maddox on November 12th, 1934 in Ohio to a 16-year-old, drug-addict prostitute mother.

Shunned by mother Kathleen — who briefly married a man called William Manson — the nascent sociopath spent much of his early life in prison.

“The only thing that my mother taught me was that everything that she said was a lie,” he claimed.

It is thought he never met his father, a colonel.

In 1955, he moved to the land of promise California with a 17-year-old lover in tow, settling into a routine of theft and incarceration in San Francisco.

Manson was jailed for 10 years for forgery and released in 1967 — the year before he orchestrated a killing frenzy that would scorch his name into history.

Caught in a swirl of hallucinogenic drugs, belief in the apocalypse, and an impending race war, the deluded narcissist recruited burned-out, malleable, middle-class followers.

The Family, as they became known, lived on isolated ranches — one in Death Valley — and grew drunk on Manson’s claim to be a prophet sent to warn of the coming “Helter Skelter” ethnic conflict.

The charismatic visionary would pump his slavish followers with LSD and re-enact the crucifixion while they were tripping, former cult members said. Whatever he believed, they would too.

On August 9th, 1969, at Polanski’s glitzy Los Angeles home, five people, including the heavily pregnant Sharon Tate (26) were tied up and massacred by Family members. They were stabbed collectively 102 times.

Tate, who was repeatedly knifed in the stomach, had her blood used to write the word “pig” on the front door.

The horrifying episode was followed by a double-murder the following night of a supermarket executive and his wife; the two-day spree became known as the Tate/LaBianca killings.

Other celebrities including Frank Sinatra, Elizabeth Taylor and Steve McQueen were reportedly targets for The Family.

Speaking in a documentary, a charged-up Manson said: “When I stand on the mountain and I say do it! It gets done ...”

Manson thought if the murders were pinned on black people, an “eschatological race war” would follow, and with The Family safe in a subterranean layer, they could emerge as the only white people in the world and then rule over it.

The keen musician called the end-times episode the “Helter Skelter”, after the song from The Beatles.

Acolyte Susan Atkins told an inmate they wanted to “do a crime that would shock the world”.

The proceedings mesmerised the city of Los Angeles and made global headlines.

Manson released an album called Lie to raise money for his legal defence and arrived at hearings with an X carved on his forehead that later mutated into a Swastika.

After a seven-month trial, Manson and four followers were convicted and received the death penalty in 1971; yet a year later the penalty was temporarily abolished and the sentences changed to life imprisonment.

He showed no remorse for his crimes.

Speaking to journalist Diane Sawyer for a documentary, Manson said: “I see blood in here every day ... I’ve lived it all my life, woman. That don’t wrinkle up my forehead.

“You could pile up 100 dead bodies in front of my cell and it don’t set me to do nothing.”

In addition to the 1994 interview with Sawyer, Manson published a memoir in 1987, Manson In His Own Words, with the help of Nuel Emmons, a former convict he knew from an earlier stint in prison.

Manson wrote in the book about his troubled youth. He was abandoned at the age of 12 and then abused and raped at reform school. “It’s obvious there is something lacking in my makeup,” he said. He also reflected on his popular image as the face of evil. “I’m nothing but the reflection of evil that goes through the minds of all those people who created the monster and keep pushing the myth to kids who don’t know any better,” he wrote.

At its height, The Family reportedly had around 100 members and was a mix of both men and women.

Manson was married twice and had at least two children, although the real figure could be higher.

A besotted woman, Afton Burton, dated Manson when he was in jail, and applied for a marriage licence when she was 26 and he was 80 in 2014 — although it expired.

After months of failing health, he died from natural causes at Kern County Hospital in Bakersfield, California at 8.13pm on Sunday.–PA